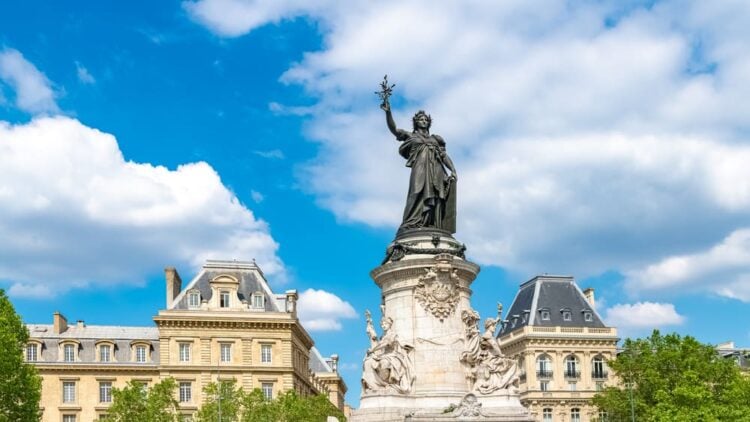 While studying or visiting France, you might have noticed a woman with unbound hair and a strange bonnet on her head cropping up in different places. Sometimes she’s topless, other times not, and she’s always wearing some version of a classical toga or chiton. At times, she’s fierce, other times peaceful.

This woman is Marianne, a symbol of the French Republic.

Let’s get to know Marianne in 12 questions, including when and why she took on this symbolic role, and where you can find her today.

Marianne is a female figure who’s a symbol of France – more specifically, the French Republic.

You can consider her the equivalent of figures like Uncle Sam and John Bull.

Marianne is usually dressed in some version of a toga or chiton, with unbound hair topped off by a Phrygian cap.

Is Marianne a real person?

Marianne is an allegorical figure, that is, a made-up symbol.

That being said, in modern times, some famous French women have served as models for busts of Marianne. These include Brigitte Bardot, Catherine Deneuve, and Laeticia Casta.

As a general rule, a new representation of Marianne is chosen each time a French President begins his term.  This will appear on things like postage stamps and the busts of Marianne made for town halls.

When was Marianne created?

An evolution of depictions of goddesses and allegories of Liberty and Reason, Marianne came into being in the decades leading up to the 1789 French Revolution.

In 1792, she was chosen as a symbol on France’s new state seal. This marked her official debut as a symbol of France, specifically the French Republic.

On the seal, Marianne is wearing classical dress and holding a pike, a (violent!) symbol of the Revolution, topped with a Phrygian cap.

Why is the symbol of France a woman?

In the late 18th century, Revolutionaries were looking for a symbol to rally behind and eventually to represent their new government. It had to be different from the symbols of France that made up the Ancien Regime, including the fleur de lys and royal protector and savior of France Joan of Arc.

At the time, Ancient Greek and Roman culture were very popular, so the French adopted their custom of using a female figure to represent a place or idea. Other ancient cultures, including the Gauls, the people who lived in France before the Roman conquest, did this as well – for instance, the Seine’s name comes from Sequana, the goddess of that river.

Some scholars also think that Marianne is female because so many words connected to her are feminine in French: la liberté, la République, la France….

Where does Marianne’s name come from?

No one is really sure why Marianne is named Marianne. The best guess is that this was a common name in the late 18th century and was thus perfect for showing her connection to the people of France.

What is Marianne wearing on her head?

In most representations of Marianne, you’ll see that she’s wearing what looks like a sort of nightcap or bonnet. This is le bonnet phrygien (Phrygian cap), which was said to be worn by freed Roman slaves, and was often worn by pro-Revolution citizens.

Why is Marianne topless?

In some – but not all – representations of Marianne, she’s baring at least one breast, sometimes both. Depending on the artist and context, this could symbolize anything from a maternal sense of protection for the French people and nation (it’s common for allegories of Charity, for instance, to be shown breastfeeding), to the fierceness and desperation of a warrior (as in depictions of Amazons), to the idea of total freedom.

For me, the best example of a bare-chested warrior Marianne is in Delacroix’s famous painting Liberty Leading the People, which depicts a group led by her during the 1830 Revolution (les Trois Glorieuses). Marianne’s dress is torn, but she has no time for modesty and doesn’t care – she is pure strength and purpose, fighting for freedom.

When it comes to the idea of Marianne being topless because she’s totally free, my French husband, who’s passionate about the 1789 Revolution and First Empire, pointed out to me that women’s fashion at that time had turned away from stiff, layered court dresses in favor of light Empire dresses, which were worn with minimal underclothing. Marianne in her topless incarnation could be seen as an extreme of this idea of being unbound by convention.

Whatever the reason she’s depicted topless, Marianne isn’t a sexualized figure (barring some political caricatures and the like). Her bare breasts are regarded in the same way those of a Classical statue would be.

For quite some time, Marianne was a controversial figure in France, or at least a divisive one. She was seen as a symbol of revolution, a rebellion against and rejection of the Ancien Regime.

It took a long time, but today Marianne is a neutral symbol of the French Republic, so normally there shouldn’t be anything controversial about her.

Who is Marianne’s rival?

For an allegorical symbol, Marianne’s story can sometimes read like that of a comic book heroine. Every country’s symbol may have its enemies, for instance if they’re at war or having another sort of conflict or difference of opinion with another country. But in France, Marianne has an actual rival: Joan of Arc.

The saint was – and is – a symbol of France, since Joan of Arc famously heard voices that called on her to lead the French army to push out the invading English and help King Charles VII be coronated King of France, saving the nation. Joan herself met a tragic and brutally unfair end, betrayed by the king and burnt at the stake by the English. But she remained a symbol of the country she saved.

Still, being a beloved figure of the Church and monarchy was not a good thing during the anti-monarchy, anti-clergy French Revolution. The Revolutionaries sought to turn all old things on their heads, and so, Joan was seen as a symbol of the Ancien Regime, not the new, free French Republic. That was Marianne.

Today, Joan of Arc and Marianne aren’t the enemies they once were, but sometimes their values still clash. That’s because, unfortunately, along with some other French historical figures and symbols, Joan of Arc has been appropriated by the Far Right.

They see her as a symbol of France’s glorious history and someone who will “protect” them from “foreign” influences (note that “foreign”tends to include anyone not white or Christian, no matter how long they’ve lived in France. LGBTQ+ people may also be included in this group, especially if they have the audacity to openly display who they are or if they want to adopt a child).

That said, you can still learn and speak about Joan of Arc in a historical context in a neutral way, and you will come across statues of her that celebrate her role as a savior of France, including the gilded one of her on horseback in Paris’s Place des Pyramides (which, sadly, the Far Right likes to rally around at least once a year). But if you see a French politician evoking her, be wary; it probably means they’re using her as a symbol of hatred, conservatism, and exclusion.

Where can we see Marianne today?

Want to get a glimpse of Marianne today? Here are some common places where you’ll find Marianne in France:

Is there a connection between Marianne and the Statue of Liberty?

The more you read about Marianne, the more the Statue of Liberty may come to mind. For one thing, both figures were at least partially inspired by the allegorical figure of Liberty.

In the depiction of Liberty, sometimes incorrectly considered Marianne, on the official seal of France, a female figure wears drapey robes and a has a crown that looks like rays of light emanating from her head; it’s easy to see how this portrayal influenced Bartholdi’s Statue of Liberty.

But depictions of Marianne may also have given him some ideas. For instance, in many images, including the 1792 state seal of the French Republic, Marianne is holding a pointed object, often a spear. This could easily be reinterpreted as a lit torch.

Beyond symbolism, both figures originated in France. The Statue of Liberty was conceived and constructed in France, a gift to the United States.

That said, Marianne and the Statue of Liberty look very different and portray different nuances of concepts like freedom. But you could say they’re cousins.

What are some other symbols of France?

Marianne isn’t the only symbol of France. Other modern-day symbols of France include the motto Liberté, égalité, fraternité, the rooster, and the French flag.

The motto and flag colors share the spotlight with Marianne on the French government’s official logo.

To learn more about Marianne, in addition to the other links in this article, both the English and the French Wikipedia articles on her are very thorough, going into her history, controversies, various iterations, and more. A French article on Vikidia has some additional interesting information.

This article from the Bibliothèque Nationale de France’s website takes an in-depth look at the evolution of portrayals of Marianne. Even if you don’t read French, it’s worth a look for the images, which include several fun Belle Époque ads where Marianne appears as things like a joyful cyclist and a vacuum!

For more visuals, you can explore a really cool gallery of busts of Marianne through the ages, via the Senate’s website.

If you want to learn even more about Marianne, I suggest starting with an online search for “Marianne symbole de la France”.

I hope you’ve enjoyed getting to know Marianne. Do you think she’s a good symbol for the French Republic? What are your country’s official symbols? Feel free to share in the comments!

3 thoughts on “Who is Marianne, symbol of the French Republic?”