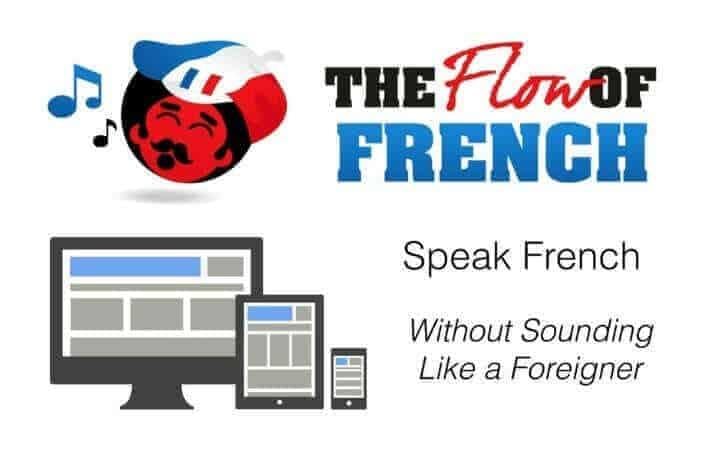 French pronunciation is tricky and there is nothing more frustrating than to spend time learning French and then hear “désolé, je ne comprends pas” (sorry I don’t understand) as soon as you speak.

That’s why I recommend you to work on your pronunciation as soon as you start learning French.

A great way to do that is to use the mimic method, a pronunciation course created by Idahosa Ness.

The idea behind the is to learn pronunciation through music so you get used to the flow of the language.

Idahosa was recently mistaken for a native German speaker when someone asked him for directions in the streets of Cologne.

That’s quite an achievement, so I was naturally curious to see how the Flow of French, Idahosa’s French pronunciation course works.

Here is my review!

This said, I only recommend products that I personally reviewed and enjoyed. In fact, I’m considering buying the Flow of English so I can get rid of my French accent.

Table of Contents
Train your brain to recognise French sounds
Perfect your French pronunciation through music
You can send recordings to make sure your pronunciation is right
Is the Flow of French the right pronunciation course for you?
Do you have any experience using the mimic method?

Have you ever heard two French sounds you knew to be different without being able to distinguish them?

That’s because your brain can’t distinguish all French sounds. You lost this ability around the age of 10 months according to a study from the Institute for Learning and Brain Sciences at the University of Washington.

When I was teaching French in Korea, I noticed that the students couldn’t hear the difference between “tu” and “tout”.

As a result, they weren’t able to pronounce these two words right.

As a foreigner, there are probably many French sounds you can’t distinguish either.

There are also sounds you can distinguish but can’t reproduce, because you never had to make them and simply don’t know how to do it (where to place your tongue etc).

That’s why the first step in your journey towards a perfect pronunciation with the mimic method is to train your brain to hear the sounds of French and learn how to make French sounds.

For example, you learn how to pronounce the /u/ sound right and not pronounce it the way you’re used to pronouncing it in English.

You also discover the most common pronunciation mistakes  English speakers make. That’s awesome if you’re a native English speaker, because the course tackles problems you have and is made for you.

If you aren’t a native English speaker, the course may not be as useful for you.

Perfect your French pronunciation through music 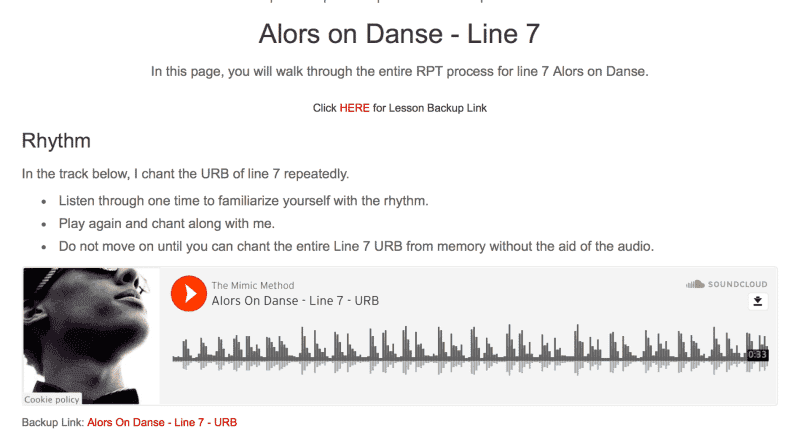 Once you can recognise all French sounds and understand the basics of French pronunciation, the mimic method helps you pronounce these sounds right as part of words and sentences.

This is particularly important, because there is a huge difference between how certain words are pronounced individually and how they’re pronounced as part of a sentence.

Each unit has one clear goal: you should be able to perfeclty sing a French song by the end.

To do that, you start by learning how to pronounce each syllable, then each word and finally each sentence.

When you can pronounce all sentences right, you’re ready to sing in French (how cool is that!).

Don’t worry if you’re a terrible singer like me, the goal isn’t to sing well, but rather to pronounce well.

You can send recordings to make sure your pronunciation is right

Each unit of the Flow of French course (and all other mimic method courses) ends with an exam.

An exam simply means that you can record yourself saying words, sentences or even singing and send the recording to the team.

You’ll then receive a correction within 24 hours.

The corrections shows you what you pronounced well or not so well and what to do to improve. All these instructions are written directly on the file.

For example, here the student needs to “open the a more”. Don’t worry if this sounds confusing, you learn what this means at the beginning of the course.

This is one of the main advantages of the . Unlike many courses that are purely theoretical without any chance to get feedback, you actually know exactly what to work on.

You’ve a pronunciation expert working with you and guiding you through the learning process. That’s extremely valuable!

Is the Flow of French the right pronunciation course for you?

If you want to improve your French pronunciation and want to sound like a native, the French (also called the Flow of French) is a fantastic course. This is a great investment whether you’re a beginner, an intermediate or an advanced French learner.

In fact, you could learn French pronunciation before you even start learning French. The advantage of this approach is that you’ll immediately have the right pronunciation when you speak and won’t associate French words with their English pronunciation.

I know that’s something Idahosa did in a few languages.

Do you have any experience using the ?

6 thoughts on “Mimic Method French: Can It Help You Improve Your Pronunciation?”