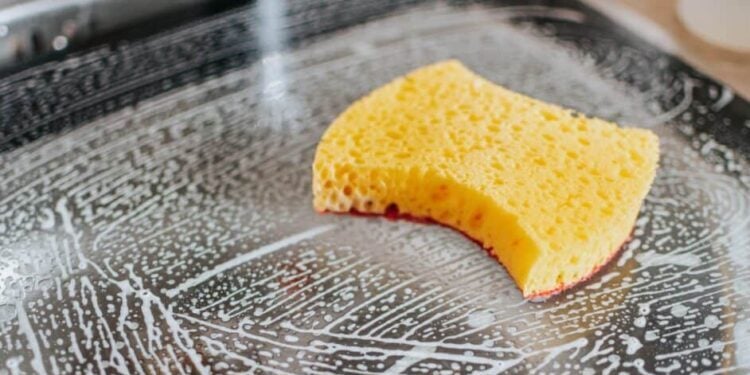 Are you one of those people whose house is clean but cluttered, rather than neat and tidy? If so, the French verb nettoyer is for you!

Nettoyer means “to clean” but also has a few more subtle meanings.

Let’s learn about this clean-cut verb whose meaning is surprisingly precise.

Nettoyer is an irregular verb that’s conjugated with avoir in compound tenses.

Note that its infinitive stem changes in the future simple and present conditional tenses; the “y” still becomes an “i”.

Here’s how to conjugate nettoyer in its most common tenses.

Here’s how to conjugate nettoyer in tenses you’ll see and use less often.

What does nettoyer mean?

Although it has a few, fairly rare additional definitions, in a vast majority of cases, nettoyer means “to clean”.

It’s used with just about anything you can clean, from your house, to your pet’s ears. Ex: Après avoir nettoyé sa baignoire, elle a nettoyé les oreilles de son chat. (After cleaning the bathtub, she cleaned her cat’s ears.)

So, for instance, J’ai nettoyé ma chambre would literally mean “I cleaned my room, removing dirt and dust”.

If you want to say “I cleaned my room” in the sense of “I tidied up my room”, you would use the verb ranger: J’ai rangé ma chambre.

If you wanted to state that you’d both removed dirt and dust AND put things away, you could say J’ai fait le ménage (dans ma chambre).

These examples introduce us to nettoyer’s cousins:

Additionally, remember that “to clean” isn’t exactly the same as “to wash”. So, if you want to talk about someone washing their body or a body part with water and soap, you would generally use the verb se laver. Ex: Je nettoierai la salle des bains, puis je me laverai les cheveux. (I’ll clean the bathroom, then I’ll wash my hair).

You may still see nettoyer used with body parts occasionally – for instance, in our example about cleaning a cat’s ears. But this will imply a deep cleaning, usually not involving soap or water.

In addition to its literal meaning, nettoyer can also be used metaphorically. For instance: La police a nettoyé ce quartier. (The police have really cleaned up (gotten rid of crime in) this neighborhood.)  You’ll also see the phrase nettoyer les cookies (to clean cookies from your internet browser).

Like most verbs in French, nettoyer has a few common variants. The one you’ll most likely come across is (le) nettoyage – cleaning. This is often used with other words, including:

Another nettoyer variant you’ll probably encounter is the adjective/adverb net(te). Net/nette has a few other meanings, but when it’s used as a variant of nettoyer, it typically means “clean” or “clear cut”, and/or “distinct”.

Clair et net (Clear as day, clear and accurate) is a very common expression you’ll encounter that includes this word.

Here are two nettoyer expressions that will hopefully emphasize this verb’s key meaning even further.

Meaning: To clean the stables of Augeas.

This expression refers to one of the Twelve Labors of Hercules in Greco-Roman myth: cleaning out the absolutely filthy, enormous stables of King Augeas. To do this, Hercules used his legendary strength to reroute two rivers. The expression today is used to mean “going to extreme lengths to clean up a dirty (either corrupt or literally dirty) place or situation.

For the Paris mayor’s staff, making the crack dealers leave the La Chapelle neighborhood will be like cleaning Augeas’ stables.

Meaning: To finish a meal so completely that not a trace of food remains on the plate.

This is the equivalent of the English expression “to clean your plate”.

Everything he cooks is so good that we always clean our plates when we have dinner at his place!

I hope this article has left you feeling like the meaning of nettoyer is clair et net. Have you come across this verb before? Feel free to share your thoughts and questions in the comments!