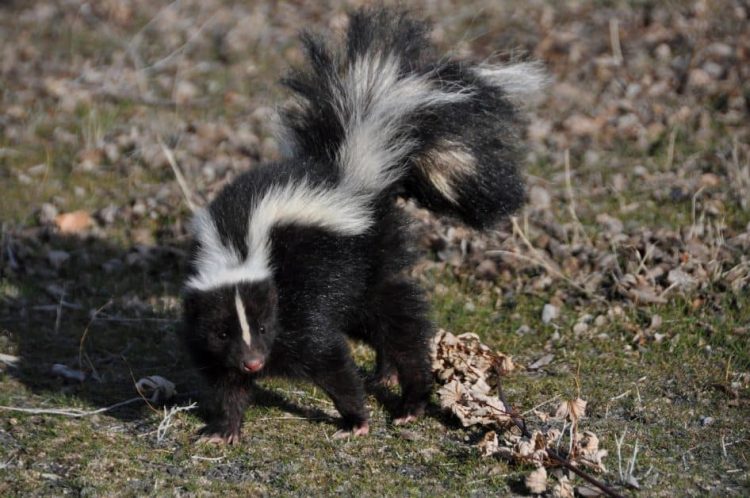 Although he’s become a controversial figure, for many of us, Looney Tunes character Pepé Le Pew was our first introduction to French culture. The skunk’s accent and love- and sex -obsessed nature are what many people outside France think of as typically French.

But Pepé Le Pew isn’t French at all. Here’s why.

1. He was created by Americans

This may be the most obvious reason; after all, Pepé Le Pew is a classic character from the American cartoon series Looney Tunes and Merrie Melodies.

He was created by famous animator Chuck Jones, in 1945. Although partially inspired by the 1937 French film Pépé le Moko, the character’s “seductive” personality comes from one of Jones’s fellow animators, who liked to brag how successful he was with the ladies. In reality, the man came on much too strong and didn’t have a lot of success – sound familiar?

Although it could possibly be a nickname, Pepé isn’t a French first name.

But there is one kind of French person that might be referred to this way: grandpas! Pépé isa rough equivalent to the English “Pop-Pop”.

As for the character’s last name, if you ask many Anglophones how to say “skunk” in French, “le pew” might be something they guess, thanks to Pepé Le Pew.  But as you may know already, the real French word for skunk is le putois.

Well, at least it’s similar, right?  Actually, if we’re getting specific about classifying animals (which is something the French are surprisingly rigorous about), Pepé Le Pew is supposed to be a striped skunk, which in French is known as  une mouffette rayée.

Still, putois does have a better ring to it, so in the French dubs of his cartoons, Pepé Le Pew is called Pepé le putois.

So, what does “Le Pew” mean?  In French ,nothing. The name is derived from the character’s distinct brand of Franglish, which includes adding the French article le to random things. “Pew” is a sound Anglophones might make when smelling something unpleasant. So, it’s not Pepé the Skunk, but Pepé the Stink!

3. His Franglish is a little off

Pepé Le Pew has a very distinct  way of talking. It’s supposed to be a type of Franglish (a combination of English and French). But if, like me, you’re a speaker of this sub-language, or if you’ve heard other people speaking it, you may realize that Pepe’s Franglish isn’t quite the real deal.

While there are some common linguistic structures French people may carry into English, adding le to everything – including adjectives and other parts of speech that wouldn’t have an article in French, the way Pepé does – isn’t one of them.

That said, Pepé Le Pew was never meant to be linguistically accurate, of course. His way of speaking is all about humor, and as someone learning French, you may appreciate how Pepé peppers his English with so many articles, since they are used a lot more in French than they are in English.

Pepé Le Pew is supposed to be a stereotypical seductive Frenchman…except he never gets the girl. The thing is, though, modern-day Frenchmen definitely don’t flirt like Pepé, and most of them didn’t behave like Pepé Le Pew even when the character was created.

I’ve written before about how the French aren’t usually into overt expressions of love. Seduction tends to be a more subtle game. You won’t see French guys chasing after women (or other men) here. It’s more about a careful glance, a few well-placed, softly spoken words.

The French tend to feel that overt expressions of any kind of emotion lacks dignity and intelligence, for that matter. So anyone behaving like Pepé Le Pew here is just as unlikely to find love as Pepé is in the cartoons.

If that isn’t enough to dissuade would-be “ladies’ men”, since 2018, catcalling or otherwise sexually harassing someone in a public place could lead to a fine of 70 euros the first time and 3000 euros for subsequent offences.

5. For the French, he’s Italian

You might think that when a Pepé Le Pew cartoon is dubbed into French, Pepé is just…French. But if you need more proof that his over-the-top accent and faux ladies’ man personality don’t translate, here it is: Pepé le Pew, aka Pepé le putois, speaks with an Italian accent in the French dubbed versions of his cartoons!

One of the reasons for this is that when properly translating the character, the French needed to show that Pepe is a stereotype of another culture. A majority of French people consider Italian the sexiest accent for their native language. Add to this the fact that “Italians are hot-blooded Latin lovers” is a common stereotype in France.

(Not that French people would up with Pepé Le Pew-level behavior. No accent is sexy enough for that.)

And so, in the French Looney Tunes cartoons, Pepé le putois uses Italian words and expressions in his speech, including silly terms of endearment like “mon petit ravioli e pesto”.

It’s very important not to believe caricatures and stereotypes. But they can also give us insight into how one culture views another. Pepé Le Pew is definitely not a character you should look to for an understanding of actual French behavior,  but he’s an interesting reflection of how Americans see the French.

You can read about some of the stereotypes Pepé le Pew embodies, where they come from, and why they’re not accurate, in our article on the subject.

Personally, I think gentleman thief Arsène Lupin is a pretty accurate embodiment of many typical French values and personality traits. He’s subtle, smart, polite, and loves logic (downsides: private and a bit distant). You can read the first book of his adventures for free online. It’s also available for free in English.

The recent Netflix show inspired by Lupin, starring Omar Sy, is also a great way to get some fun insights not only into a French character, but life in modern-day France (well, minus the thrilling heists – that’s more of a special occasion type of thing…).

Of course, these are the opinions of an American. I asked my French husband if he could think of a French character in popular culture who accurately embodies some French personality traits, and his answer turned out to be one that I feel bad for not having thought of right away: Astérix!

The star of the famous French comics (and, later, films) is a Gaul, an ancestor of modern French people, but his personality and adventures are famous for being allegories for the French today.

Astérix is especially known for loving his homeland and for resisting the influence of outsiders. You could see this as taking a stand against globalization, which is somewhat true of most French people. They may consume lots of global products and enjoy lots of non-French entertainment, but globalization is still seen very negatively here.

But you could also interpret Astérix’s resistance as the kind of questioning that the French still like to do about just about everything, from politics to news headlines, to social issues.

Although Arsène Lupin and Astérix are very different on the surface, see if you can spot some common characteristics in their personalities. This could give you some interesting insights into what French culture is really about.

That said, there’s nothing wrong with enjoying a cartoon, as long as you don’t take it seriously. When it comes to Pepé Le Pew, this is especially the case. We can laugh at his forceful, failed attempts to seduce poor Penelope Pussycat, but also understand the importance of consent (and of course, the cartoon itself doesn’t support Pepe’s actions, but mocks them). And we can laugh at his over-the-top French accent and stereotypical French mannerisms while understanding that it’s all in good fun, and not at all what real French people are like.

To get at the truth, you have to go beyond Le Pew.