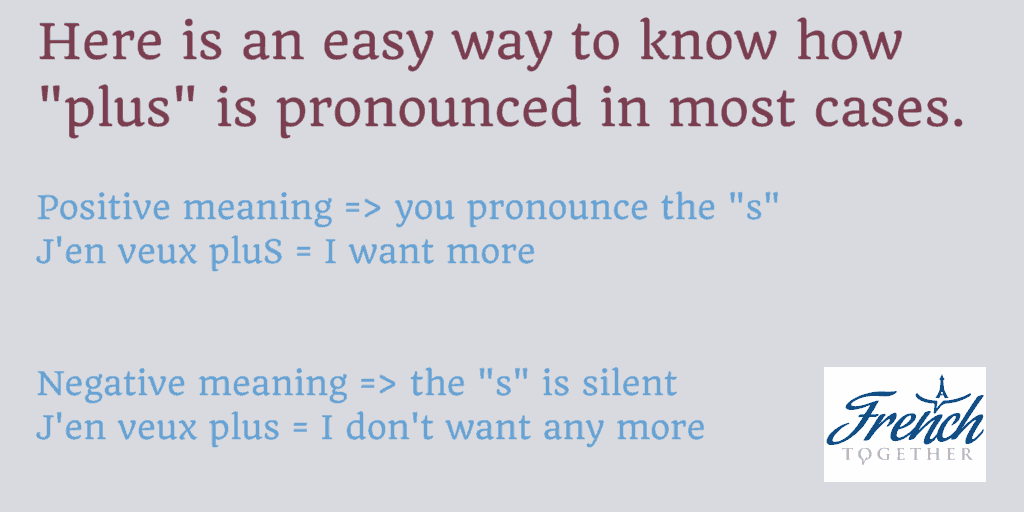 Could a language have a sentence meaning both “I want more” and I want less”?

Luckily, you don’t need to learn grammar rules by heart, and you shouldn’t.

Your focus should be to get exposure to the language so you automatically learn grammar as you expand your vocabulary.

But sometimes, knowing some hacks you can use to better know how to use the language helps.

Today, I would like to show you general rules you can use to know whether you should pronounce the final “s” in “plus” or not.

You pronounce the “s” in “plus” when…

Plus has a positive meaning

Generally, when “plus” has a positive meaning, you pronounce the final “s”. There are exceptions though.

I will have more free time in September

One must work more to earn more

This is a sentence Sarkozy famously used to criticise the 35-hour workweek.

If it’s used in a comparison and precedes an adjective starting with a vowel or a silent “h”, the “s” of “plus” is pronounced “z”.

He is more clever than average

“Plus” has a negative meaning

When “plus” means “not anymore”, “no longer” or no more”, you generally don’t pronounce the final “s”. In this situation, “plus” is used in a “ne…plus” construction.

However, “ne” is omitted in spoken French, so the absence of “ne” doesn’t mean the “s” is necessarily pronounced.

There isn’t any more

“Plus” precedes an adjective starting with a consonant in a comparison

If “plus” is used in a comparison and precedes an adjective starting with a consonant, it’s silent.

I am taller than you

Note: don’t mistake “plus” and “plu”. The latter is the verbs “pleuvoir” (to rain) or plaire (to please).

If there is one thing you need to remember from this article, it’s that you generally pronounce the “s” when “plus” has a positive meaning and don’t when it has a negative meaning.

Remember this rule and you will be right in most cases.

13 thoughts on “Plus: When Should You Pronounce the Final “s”?”