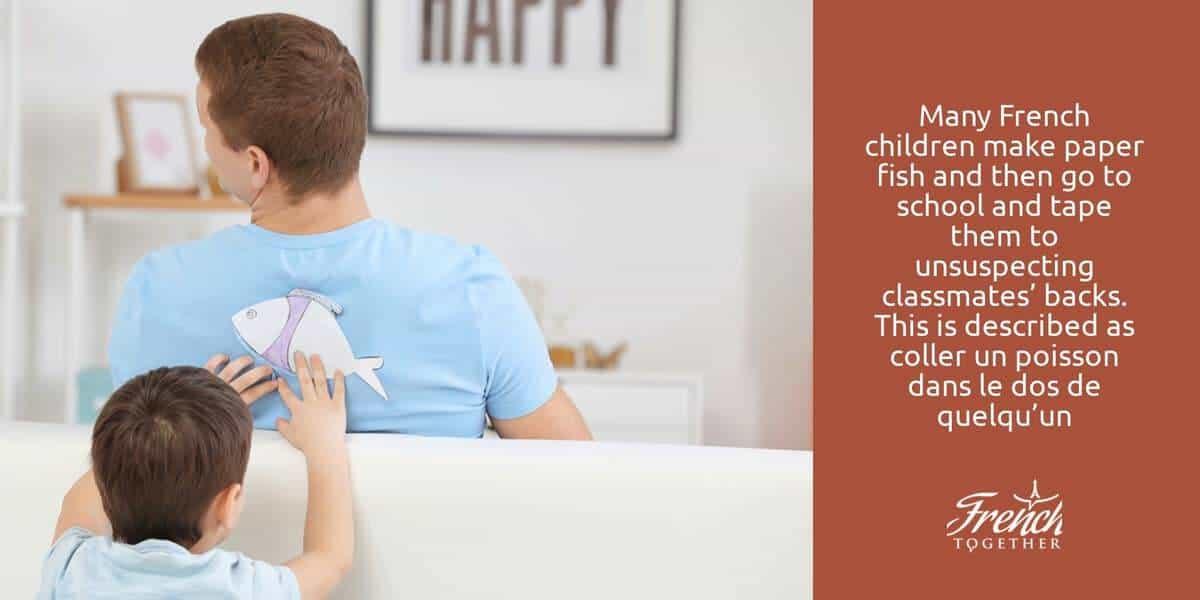 Here’s some great news for French learners: The Académie Française recently announced that French words will no longer be gendered!

In case you’ve never heard this term, it means I played a trick on you, in honor of April 1, or, as it’s known to Anglophones, April Fool’s Day.

As you may have noticed, though, for the French, April Fool’s is “April Fish”.

Let’s find out how the French celebrate April Fool’s Day and what on earth playing jokes on people has to do with fish!

Why are fish associated with the French April Fool’s Day?

Whatever country you’re in, the origins of April Fool’s Day and its traditions are murky. Theories about where the practice got started range from antiquity, to the Renaissance.

One theory that I’ve always heard involves a calendar change. In 1564, King Charles IX switched France from the Julian calendar to the Gregorian calendar, which meant the new year started several months before it would have under the old calendar. Some people thought it would be funny to wish each other “Happy New Year” and exchange silly presents on the old New Year’s Day – April 1. As the years went by, the new calendar became the norm, but April 1 was forever associated with a sort of world-turned-upside-down quality.

Unfortunately, although this theory is widely known, it turns out that it can’t be the reason for April 1’s reputation in France and elsewhere, as this very intelligent article points out. After all, as author Alex Boese reveals,  in addition to some disparities about the differences between the two calendars, April 1 as day of practical jokes and mischief seems to be a very old custom that predates the calendar change. Boese gives compelling examples of this, including a mention of the day in a 1508 poem by Eloy d’Amerval.

Okay, so what’s the deal with the fish?

Some theories say that April was a bad month for fishing, or a time (depending on the era) when fishing was forbidden, since newly spawned fish had to grow. So, to serve fish to eat in April was impossible – claiming to see or eat one could only be a joke. According to this site, some April 1 fans even took things a little bit farther, by throwing dried herrings into streams or rivers and crying out, “Poisson d’avril!”

Other historians suggest that there might be a tie with the practice of carnaval and its connections with fisherman. For example, to this day, the Dunkerque Carnaval starts with dried herrings (luckily wrapped in plastic) being thrown from the windows of City Hall into the festive crowd gathered below. Still, this theory seems off to me, since Carnaval happens in February, not April. Then again, I know many people from Dunkerque and if they could, they’d (understandably) celebrate Carnaval year-round….

There are a seemingly endless amount of poisson d’avril origin theories – so much so that listing them all here would be exhausting for all of us. But if the holiday fascinates you, this article (a written version of a video I’m going to mention further on) offers what is probably the most complete list I’ve found in one source.

How do the French celebrate April 1?

As is the case in many other countries, the French media love making April Fool’s jokes, with strange or impossible news stories in papers, on TV, the radio, and the internet. But April 1 in France is probably the most fun for kids.

Many French children make paper fish and then go to school and tape them to unsuspecting classmates’ backs. This is described as coller un poisson dans le dos de quelqu’un (literally, “to stick a fish in someone’s back” not on, strangely enough).  It’s one of the few times when French people really let go and get silly. Their neighbors, the Belgians, also stick paper fish to each other’s backs, apparently, but this surprises me less, as Belgians are known in France for their offbeat sense of humor.

That being said, while taping paper fish to other kids’ backs is a French tradition, in my experience in schools in Paris and its suburbs at least, it’s not as popular as I would  have thought.

When I was an assistant teacher at an upper-class suburban elementary school, for example, you did see some paper fish here and there, but not every kid had one on their back or planned to put one on someone’s back. Many of them seemed like they didn’t particularly care.

It seems more like something that’s appreciated and may get a few laughs but isn’t the trendiest thing on the playground.

Of course, that’s just my experience in Paris and its surroundings. If you’ve experienced April 1 in France, I’d love to read what you’ve observed, so feel free to leave a comment.

Sticking paper fish onto each other’s backs may not be the thing every single schoolkid does in France, but this custom absolutely authentically does exist, and it goes back generations.

My husband did it at his French elementary school in the 1980’s, and if you go to the 44 second mark of this video about the origins of the holiday, you’ll see a postcard from the late 19th or early 20th century that shows a group of mischievous boys who’ve stuck enormous paper fish to the backs of an elegantly dressed couple.

(By the way: This video may be a good way to practice your French listening skills. Its narrator talks in a slightly retro way, reminiscent of old news reels, and the subject gets a bit into history, which may require some specific vocabulary, but see how you do!)

This brings up another poisson d’avril tradition, but one that’s lost today. In the late 1800’s and early 1900’s, people used to send each other poisson d’avril postcards. It may not have been as silly as seeing someone with a fish stuck to their back, but I imagine getting one probably made recipients chuckle.

Interestingly, the wording on the cards aren’t always jokes: often, they’re simply affectionate, wishing good luck or sharing thoughts of friendship or love. Then again, they could also sometimes bear insulting inscriptions, a bit like comedy “roasts” of today.

You can easily find many, many examples of these vintage postcards by doing an internet search for “poisson d’avril cartes postales anciennes”.

In English, after you’ve gotten the reaction you hopefully wanted from your April Fool’s joke or prank, you triumphantly yell out “April Fool’s!” The French do the same, saying “Poisson d’avril !” when their joke is discovered.

But among adults, at least, I usually tend to hear something more like this: “Non, c’est un poisson d’avril.” (No, it’s a just an April Fool’s Day joke).   It makes sense to me, since the French tend to be more lowkey, even when media hoaxes and paper fish are involved.

Still, if you pull of a great prank, or manage to stick a paper fish to your friend’s back, only to have them notice several hours later, feel free to bask in it and simply say, “Poisson d’avril !”

On the other hand, when you’re talking about April 1 itself, you don’t call it le poisson d’avril. It’s just le premier avril (the first of April/April first). As you might expect, the date has become synonymous with jokes, so instead of un poisson d’avril, you might read or see the phrase une blague du 1er avril (an April 1st joke/an April Fool’s Day joke).

Taping a paper fish to someone’s back isn’t the only poisson d’avril. You can find examples of recent jokes from companies, newspapers, and other organizations in articles like this one (un canular is a hoax or joke).

For anyone who’s looking for a reason to shout “Poisson d’avril !”, you can find plenty of suggestions online. This one, from the (now defunct) French version of popular website Buzzfeed, has some good ideas. Plus, reading their descriptions is a great vocabulary-building exercise.

Of course, as in life in general, make sure your poisson d’avril doesn’t put you or anyone else (animals very much included!) in danger, d’accord?

If you prefer to observe jokes rather than play them (or be the victim of them), here’s a nice list of some famous poissons d’avril . My favorite on the list is probably the one the article says had the most impact: A local news outlet reported that wind turbines, which are present throughout the French countryside, were affecting the Earth’s rotation!

Among Parisians, a poisson d’avril that didn’t convince any of us but still got a lot of laughs was the RATP (Paris transit authority) making puns with names of certain Metro stations. For example, the station usually known as Goncourt was changed to “Goncourt de beauté”, which sounds like concours de beauté (beauty pageant). You can see a slideshow of them here – see if you can understand them all Or you can check out this article, which includes a translation of each of the puns, and finishes with a very cute (subtitled) poisson d’avril video featuring a cat and, of course, a fish.

Do you celebrate April Fool’s Day where you live? Do you think poissons d’avril (the literal, paper kind, as well as practical jokes in general) are funny?

9 thoughts on “Poisson d’avril ! Why the French say “April Fish” instead of “April Fool’s””