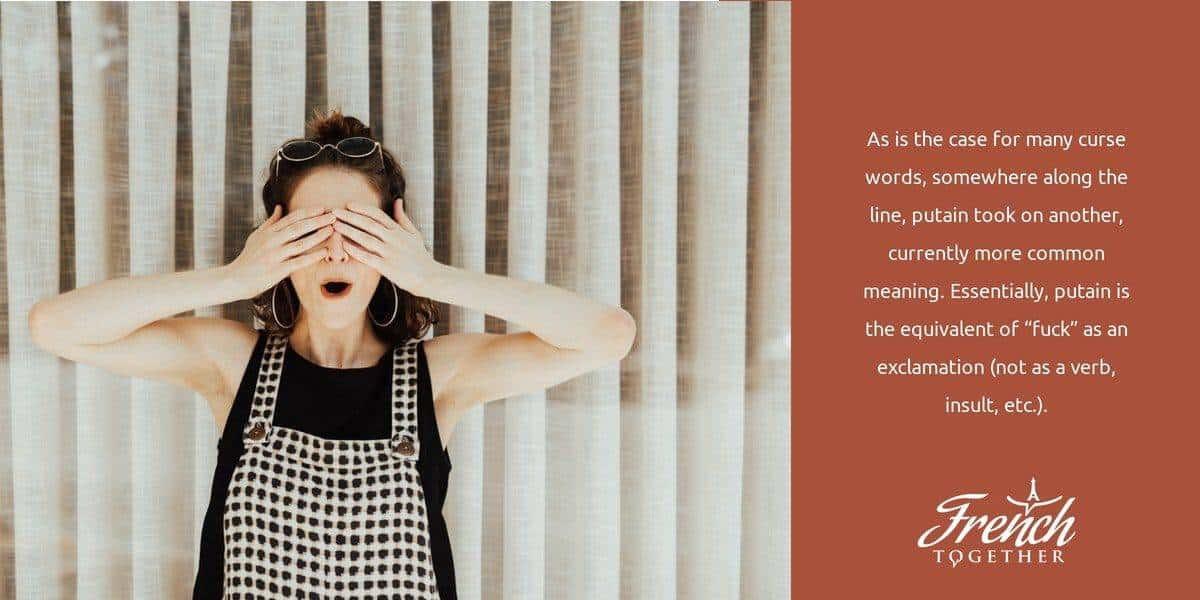 Have you ever had  a moment when you felt like you really, truly had become French? One of mine was the time I was having a bad day and then dropped something on my toe and hollered “PUTAIN!”

That’s not a joke. As an English-speaker, I tend to utter pain- and frustration -induced obscenities in my native language, or, if it’s in French, I veer towards the curse word I’ve known for the longest time: merde.  But suddenly, after years of study and some time living in France, there I was, actually spontaneously cursing like the French people I knew!

While writing French Together’s extensive list of French curse words , I was surprised to learn that putain is the French’s favorite bad word, not merde.  But it does make sense. Although I hear both quite a lot, putain is more versatile and usually has more impact.

Let’s get to know putain a little better, shall we? Maybe it will become your favorite French curse word, too.

What does putain mean?

If you look it up in some dictionaries or online translation engines, putain means “whore”. Fellow etymology junkies can click here to learn how that came to be. That said, using putain to designate a prostitute or whore tends to sound old-fashioned today. The related word pute is more commonly used, especially if the intention is to be vulgar or insulting; prostituée is the neutral word.

As is the case for many curse words, somewhere along the line, putain  took on another, currently more common meaning. Essentially, putain is the equivalent of “fuck” as an exclamation (not as a verb, insult, etc.).

In English, you can say “Fuck!” in a negative context, but it can also be used to show disbelief, or even be positive sometimes, although in that case it doesn’t always stand alone (examples: Well, fuck me!; Fuck – that’s incredible!).  Putain works the same way, except it’s usually on its own. For example…

The fact that you don’t have to add or agree anything with putain makes it easy to use, but it also means that you have to know the context to fully understand what emotion(s) it’s being used to express.

How vulgar is putain?

Curse words in France aren’t as taboo as they are in many other places. Some French TV shows will bleep out curse words, but this is due to the influence of American television; essentially, it’s to look “cool” (with the exception, occasionally, of shows that are intended for families to watch together). But overall, censorship is rarer. Most French people use curse words to some degree, although older generations generally do it much less frequently, which is the case in many other cultures, too.

Translating putain can be tricky. The simplest way to define it is the way I did a few paragraphs ago: it’s an equivalent of “Fuck!” as an expression of anger/surprise/joy. But because of its varying degrees of harshness and vulgarity, it’s sometimes better to choose “shit”, “holy shit”, “holy crap, or even “Oh crap!” as an equivalent, depending on the context.

Still, feelings about putain certainly aren’t the same across the board. Some people aren’t bothered by it, while others still consider it extremely vulgar. This comment thread offers a really interesting glimpse at how different native French speakers perceive putain – one even points out that using it as an obscenity is anti-feminist. Food for thought…

I’d say if you’re going to hang out with French people forty- or even fifty -something or younger, in an informal setting, you should probably be prepared to hear some curse words from time to time, putain included. But if you’re spending time in a family setting, with kids, with elderly people, work superiors, clients, or anyone else you should be respectful around, keep your language clean.

This said, there is sort of an exception….

Putain in the south of France

If you’ve ever been to the south of France and talked with locals acting like locals (not on their best behavior for tourists), you may have noticed that they say putain (in the south, pronounced with a nasal “g” at the end) quite a lot.

Although the word means the same thing as it does in other parts of France, it’s become a very common way for people in this region to punctuate or emphasize their words – think “uh” or “you know”, on steroids. It’s not the most refined or consistently appropriate thing to say, but it’s not considered harsh or vulgar by people who understand the local culture.

That said, I have met many people from the south of France who never did this – but again, they may just have been on their best behavior for an American (the French consider us to be a bit prudish…I probably should have talked like I usually do and then they would have seen that this is definitely not always the case).

It’s left me wondering if this is a stereotype, but according to my research, it’s absolutely true. I’ve even heard that French kids in the south aren’t always reprimanded for saying putain, while in Paris, it’s a big no-no (which I can confirm – my husband yelled at my four-year-old about it the other day).

That said, not all people are the same, so if you talk to a person from the south of France, don’t expect them to say putain all the time, and definitely, definitely don’t pepper your own speech with this word – they might personally not appreciate it, or, if they do say it a lot, they may think you’re mocking them.  If you’re a natural when it comes to obscenities, like myself, wait to get to know them better before letting yourself go.

Regardless of the context or where they come from, sometimes, French celebrities will forget themselves and say putain in public, to a very mixed reaction. A number of journalists/commentators/everyday people will be shocked, but most will just seem like they get it and find it amusing.

Like most curse words, putain has some variants, and even a preposition that alters its meaning.

Let’s get to that one first.  If you’ve spent time in France or have watched a lot of French TV or movies, you’ve probably heard someone say putain de…followed by a noun.  Putain de is the rough equivalent of “fucking” (adjective form). For example, Ce putain de pantalon est trop serré. (These fucking pants are too tight.)

Note: “Brioche” is not a common French name for horses, but if I had a horse, that’s what I would name it.

Speaking of exceptions, you may hear the phrase putain de toi. This comes from a song by legendary French singer/songwriter Georges Brassens, who often played with words. Essentially, it translates to “you fucker” in a fond, joking way, as you can tell by the song’s lyrics.

Interestingly, according to this site, the song’s title was originally written “P… de toi”. Using the first letter and then ellipses is a common way French people censor curse words in writing today. When the song was released, in the 1950’s, the censorship wasn’t Brassens’ choice per se: it was apparently forbidden to print obscene words, even if (luckily for Brassens), you could say them in speech or song.

That said, unless you’re referencing the song, using  putain de with a known being will probably come off as confusing to French-speakers.

On the other hand, you may hear putain de ta race which is sort of like saying “Fuck you and your family”.  This expression is mostly used by young, lower-class people, and is considered extremely offensive just about anywhere, so I’d say it’s one to know, but not to use.

So far, we’ve seen that French people tend to be fairly laidback about curse words, including putain, and that the word on its own can even be intended in a positive or surprised way. But add a few more words to it, and it becomes a legitimately vulgar expression that won’t get a pass in mixed company.

Putain de merde literally means “whore of shit”. That doesn’t really make much sense, but when you’ve gotten to the point when you say this, you’re too mad to care. This is the expression French people use when they’ve gotten to the breaking point. Everything is going wrong, everything is against them, and they are mad as hell.

That said, this is still French culture, so you’re as likely to hear someone yell this in a real-life moment of rage, as you are to hear it in a comedy film intended for general audiences when, say, the protagonist’s car breaks down.

Putain de bordel de merde  – “fucking brothel of shit” – makes slightly more sense, but don’t be fooled; this is the ultimate angry French person thing to yell. It’s when you are so angry that you will actually set aside valuable seconds to articulate all of these vulgar words. I think a good equivalent in English might be “Holy motherfucking shit!”

Like putain de merde, you will hear this in real life, as well as films for general audiences, etc. But it still would be shocking if someone said it on the street, and definitely should be avoided in most situations.

To be honest, if you’re truly angry, you may never say either one of these phrases. Personally, when I’m really, truly made, I automatically revert back to my native language. But maybe some day there will be an exception. I’m kind of scared to find out….

How to say putain without putain

Now that you know all about putain, what if you don’t want to use it?

When my stepmother gets frustrated, she usually says “Oh sugar!” instead of “Oh shit!” It’s silly but at least she’s accomplished her goal: not cursing around her family.

Do you or someone you know do this in your native language?

If so, or if you’re worried that you’ll get too used to saying putain and then end up shouting it in mixed company, there’s good news: French people do the shit/sugar thing, too, especially for putain. They use two common words that begin with the same sound as the curse word but have very different meanings.

If you ever hear an exasperated or excited French person say Punaise! or Purée !, you can be almost 100% certain that they’re not talking about bedbugs or mashed potatoes.  If they’re especially emotional, they often draw out or emphasize the “u”: Puuunaise!

I don’t think there’s a particular difference between these two “clean” putains – it just seems to be a matter of preference. My French husband, for example, says punaise in front of our son, which means our son probably heard putain from…me.  Sigh….

What do you think about the word putain? Will you or have you ever use(d) it?