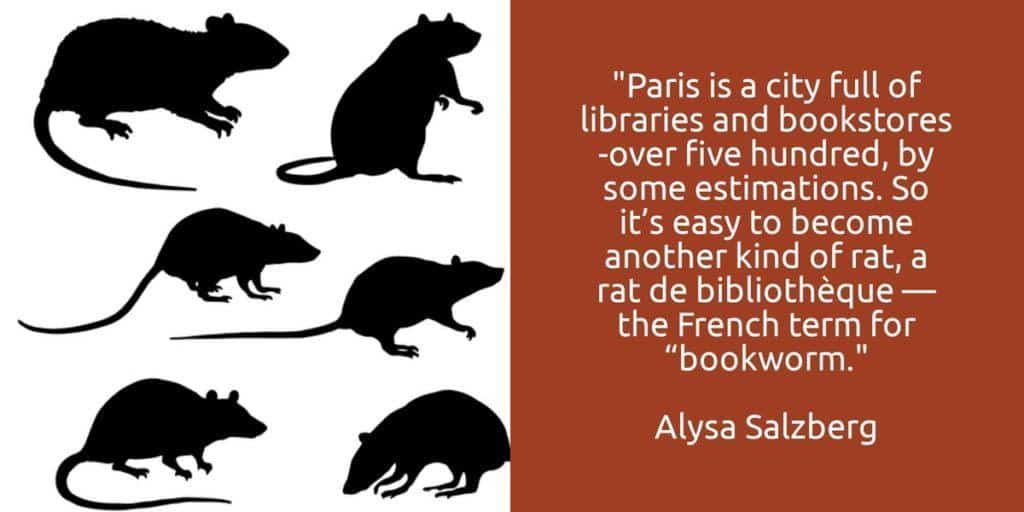 One winter night, I cross the cobblestones of the rue Saint-Julien le Pauvre, shooting a quick, but ever-impressed look at Notre Dame, which seems to tower over everything around me, even though it’s across an arm of the Seine.

When I look down at the street in front of me, several furry forms scurry past, just a few paces away – rats. It’s a surprising sight, watching a small crowd of them dart through the gateposts of the Square René Viviani. But I’m not as surprised as I might have been a few years ago.

I remember one day my husband and I heard that there were supposedly rats terrorizing tourists on the lawns of the Tuileries Gardens, one of Paris’s most elegant parks.  Intrigued, we headed there, but saw nothing unusual: crows, a proliferation of gulls and pigeons, and small, darting birds – even some goats who were brought in to clip the grass.  Not a rat in sight. It must have been a rumor.

The rumor persisted, often in the foreign press, which shared horrified reports of rat sightings in just about every famous outdoor space in the city.

Then, a park up the street from us was closed for dératisation –rat removal.

Recently, we’ve started spotting them in the park closest to our building.  One, a big, brown fellow, darts out so often from the park’s main gates, to a little plot of vegetation nearby, that on days when my son and I don’t see him, we worry something’s wrong.

This past January, a city sanitation worker posted a video online that showed a mass of rats inside a trash can. The press went crazy, and many Parisians seemed to wake up.  Residents started sharing images of those dératisation notices on the gates of their own neighborhood parks.  Everyone was asking why there were suddenly so many rats.

The answer I’ve heard, from both word of mouth, and articles like this one,  is that three years ago, France had to conform to European Union legislation banning the use of poisons and pesticides that had previously served to keep the rat population in check.  This ban, combined with issues like people littering or leaving food behind after finishing picnics in their local parks, as well as several recent floods of the Seine forcing more rats to abandon their lairs, has created the perfect conditions for the rodents to thrive in plain sight.

Then again, many sources claim that the Mairie de Paris (Paris Mayor’s Office), denies anything out of the ordinary. According to them, the rat population hasn’t increased at all; it’s simply become more visible. They blame it mostly on those aforementioned floods. But the thing is, while some reports will grudgingly admit the presence of rats in areas near the Seine, I live very far from there – as well as from Paris’s canals, artificial bodies of water in parks, and so on, and we’ve still got lots of rats.

If you look at the Mairie de Paris’s official webpage about the rat issue, you’ll find that, currently at least, they agree there is a problem, and are taking measures like using eco-friendly (but maybe not rat-friendly?) traps, and tricks like new gutter protectors to keep the rats in the sewers, one of their traditional homes. Still, they remind concerned citizens, completely eradicating rats from Paris would be impossible.

This isn’t admitting defeat, but simply a feature of this city –any city, really. While there might be a boom in their population today, rats have been a part of Parisian history for a very long time.  They may even have saved the lives of some Parisians’ ancestors.

During the Siege of Paris in 1870, when most of the city’s inhabitants were reluctantly flirting with starvation, rats became a source of meat for many. Parisians would buy them at specialty butcher stands, like the little operation set up by the entrepreneur in Narcisse Chaillou’s painting Le Dépeceur de rats. When they were served to guests or restaurant clientele, they were usually passed off as something else – except by a few irreverent souls, including restaurants that joked about the elegant preparation and accompaniments of their servings of rats.  This menu, from a Christmas meal at an elegant restaurant, featured Le Chat flanqué de Rats (Cat flanked by Rats), among many other unusual dishes.

Rats are often seen as repulsive and dirty, but (like the cat they were paired with), Parisians had to admit they didn’t taste too bad.

Another kind of Parisian rat that became famous in the 19th century are the petits rats de l’Opéra, the young girls who were trained as ballerinas at the Paris Opera. Unfortunately, most of them didn’t go on to particularly happy fates; instead of ending up professional ballerinas, they were often forced into prostitution. When you look at Degas’ famous sculpture Petite danseuse de 14 ans (Little Dancer Aged 14), you’re not just seeing a young ballerina or a revolutionary work of art (mixed media sculpture wasn’t really a thing at that time); you’re also seeing a petit rat named Marie van Goethem.

Today, girls who study at the Ecole de l’Opéra are no longer called petits rats, and thankfully don’t share the same fate.  But some other rat words linger.

For example, Paris is a city full of libraries and bookstores -over five hundred, by some estimations.  So it’s easy to become another kind of rat, a rat de bibliothèque — the French term for “bookworm”. Growing up in the US, I was a bookworm, but I’m happy to say that in my new home of Paris, I’m now a cuter book-obsessed animal.

If spending time in libraries and bookstores is less appealing to you than walking around Paris, you’ll still find signs of rats everywhere (even if you manage not to run into any real ones).  In the Latin Quarter, for example, you might spot a small, centuries-old street that was once called the rue des Rats. Its name was changed to the human-oriented rue de l’Hôtel-Colbert, in 1829, but its original appellation remains, carved on the wall of one of the buildings at its end.

If you’re in the north of the city, you may find yourself passing by the Place Blanche, once the site of a café well-known among the 19th-century bohemian crowd, Le Rat Mort (The Dead Rat).

Interestingly enough, these places aren’t from a creature who might be invoked to keep them in line: the erstwhile rue des Rats is a short stroll from the rue du Chat qui Pêche (Fishing Cat Street), and the Rat Mort used to be located near the legendary Chat Noir (Black Cat) cabaret.

In the center of the city, the shop window with its hideous display of dead rats that you might recognize from the movie Ratatouille, can be found a few dozen paces from one of the Châtelet Metro exits. You’ll find similar windows, with everything from stuffed pigeons, to marmots, to rats (of course), in many other parts of the city, as well. Exterminators like to display their taxidermized “trophies” as proof of their efficiency.

Still, the rats of Paris abound, far outnumbering the exterminators.

This doesn’t bother me too much.  I have to admit, I have a soft spot for these little, furry creatures, whose intelligence and loyalty has been proven in countless studies. Of course, I realize that having too many of them around could lead to serious health- and sanitation-related problems.  But I can’t help but feel a little burst of joyful surprise every time I see a rat run by.

For me, the rats of Paris are also those of us living secret lives, hiding away in libraries with our noses in books. Rats are that friend you may not appreciate much, but who’s there to help, as the actual rats helped Parisians get by when they had no other food. Rats are sanitation workers in their own right, and like the rats themselves, their human colleagues aren’t usually as appreciated or valued as they should be.  Rats are those who change billboards and advertising posters before dawn, so that each week a part of the cityscape is altered, as if by magic.