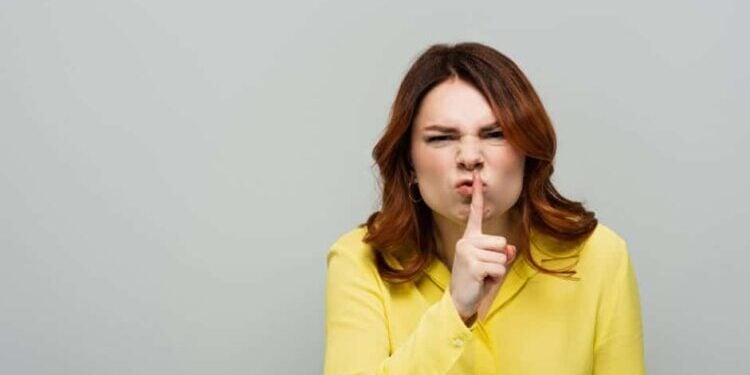 It’s not the nicest phrase, but most of us will say “shut up” to someone at least once in our lives – and we’ve probably been told to shut up, as well.

Native French speakers have also experienced this, of course. In fact, there are a lot of ways to say “shut up” in French.

Let’s look at some of the most common ones you’ll come across.

What to know about “shut up” in French

Before we begin, remember that most of the ways to say “shut up” in French rely on verbs .This means that while you’ll usually hear them used in a short phrase (Tais-toi  ! ; La ferme !), you might also see them used – or use them yourself – in longer phrases and sentences. For instance: Il va falloir la boucler. or Je veux simplement que tu te taises.

Several of the French “shut up” ‘s on this list typically use hyphens. This has to do with the fact that the imperative tense is being used.

Another thing to keep in mind is that while our list features no less than nine common ways to say “shut up” in French, there may still be some others! Slang terms are always being invented, and of course there could be a particular poetic turn of phrase that someone chooses to use instead of a basic command.

But if you want to say “shut up” of if you’re told to “shut up” in French, most of the time these are the phrases you’ll encounter.

The nine most common ways to say “Shut up” in French

The generic “shut up”

The reflexive verb se taire means ‘shut up’ in French. It can be said in a rude way or a somewhat neutral way (bearing in mind that it’s never particularly nice to tell someone to shut up, of course).

If you want to be somewhat rude but not go overboard, this is the “shut up” to use.

What if you don’t have time to actually articulate that you want someone to be quiet or shut up? Chut ! is the French equivalent of the English “Shhh!”

Like its English counterpart, it could be considered an onomatopoeia, since it’s the word for the sound  you make when you’re shushing someone.

Also like its English counterpart, it’s not necessarily rude the way “shut up” is. You might say it as a warning to someone if they need to be quiet, or you might hear a librarian or teacher use it to quiet rowdy kids.

It’s the “shut up” you might use if you can’t say “shut up” due to politeness, time-sensitive, or sneaky reasons.

The “Shut your mouth”

If you want to go a step farther than just a regular “shut up”, Ferme ta bouche is a good place to start.

It literally translates to “Shut your mouth”.

One of the meanings of boucler is “to close”, and that’s the one used in this phrase. As with Ferme-la and La ferme, the  “la” in this phrase refers to la bouche (the mouth of the person being addressed).

Like “Shut it”, Boucle-la is far from being polite, but generally isn’t as vulgar or aggressive as some of the other examples on our list, including its cousins Ferme-la and La ferme.

The “Shut the hell up”

These two phrases are related to Ferme ta bouche, but much less polite.

The “la” refers to la bouche.

Keep context in mind when you see La ferme – it can, of course, also mean “The farm”. Still, given their extremely different meanings and uses, it’s unlikely you’ll get these mixed up!

If things escalate, you can go from Ferme ta bouche to Ferme ta gueule.

On its own, gueule means a muzzle or mug (if you like old-fashioned slang). But like some other French swear words that aren’t inherently obscene (dégueulasse (disgusting), which contains the word gueule, comes to mind)  this word usually takes on an obscene connotation for the French. It has to do with the idea of comparing a person’s mouth to an animal’s.

In the previous example, we saw that the word gueule isn’t inherently obscene – it basically means “muzzle” or “mug”. But comparing a human’s  mouth to an animal’s really irks French people, so takes on an obscene cast.

Ta gueule is a really interesting obscene French expression that I’ve written about before. In some situations, it can be very rude, even brutal.  But you might also see it uttered as an explanation of exasperation towards someone, like “Enough already!”

Its versatility makes this expression one that you’ll often come upon in French shows, movies, and dialogues in French books and comic books. You’re just as likely to hear it in a comedy as you are in a film noir.

That said, it’s best not to use Ta gueule in an attempt to be cool or joke around, though, because in everyday speech it’s extremely rude and obscene most of the time.

The internet slang “Shut up”

Sometimes — in a French chatroom full of young people, for instance — you might see the abbreviation  “tg”. As you may have guessed, this is an abbreviation/internet slang for ta gueule.

Like the full expression it replaces, this can be used either in anger and aggression, or as a joke among friends. But don’t use it unless you’re absolutely sure no one will mistake your meaning, and never use it with someone you don’t know or in a formal, general, or professional context.

Also be aware that, as with all slang and texting/internet speak, this may no longer be a “cool” way to communicate by the time you read this.

The disbelief “Shut up”

In American English especially, you might hear someone exclaim “Shut up!” to express disbelief.  There is no exact French equivalent for this, so simply use a typical French expression of disbelief instead. These include:

– C’est pas vrai ! (Note that this is grammatically incorrect, but in everyday informal French, the ne is often omitted, especially when talking quickly or expressing an emotion like surprise.)

How to say “Shut him or her up” in French

If you want to talk about making someone shut up, you would typically say faire taire [quelqu’un].

For example: Il en sait trop, il faut le faire taire. (He knows too much, you have to shut him up.)

How to say “Be quiet” in French

Now you know nine ways to say “shut up” in French. But what if you want to ask it in a nicer way?

French is known for being a polite language. French-speakers say “please”, “thank you”, and greet and address each other with nominatives more often than they might in many other languages.

And yet, when it comes to something that probably comes up a lot, like asking someone to be quiet, amazingly, there’s no standard French way to express this politely!

If you’re talking to someone you’re close with, like a significant other or family member, you could use an explanation like J’ai besoin d’un peu de silence. Of course, your tone is also important here; say it gently or even apologetically, depending on the circumstances.

Here’s another example of using an explanation to explain that someone should be quiet: The other day I was at the library and I heard a man explain to his toddler, On est dans une bibliothèque, alors il faut parler doucement. (We’re in a library, so we have to speak quietly.)

What about something like asking kids at French schools to be quiet? As this interesting Word Reference thread https://forum.wordreference.com/threads/be-quiet.290547/ reveals, French teachers express “Be quiet” in many different ways, but most often Silence or Silence, s’il vous plait, seems to be the general rule.

Some people say teachers would use the phrase Taisez-vous, but from what I experienced when I worked at French schools, as well as with general interactions with French people, that might be what a teacher would say if they were getting frustrated that the children weren’t quieting down, not an initial request. Still, it may just depend on the teacher.

That said, although “Be quiet” doesn’t have as many English equivalents – let alone a single one – it’s never a good idea to replace it with one of the ways of saying “shut up”. That will come off as impolite and unnecessary.

Now you know some ways to say “shut up” in French. But be sure to use these phrases carefully. Remember that it’s always best to try to be polite, unless you’re absolutely sure that “Shut up” would work in that context. Otherwise, you might find yourself hearing a French “Shut up” (or worse) directed at you!