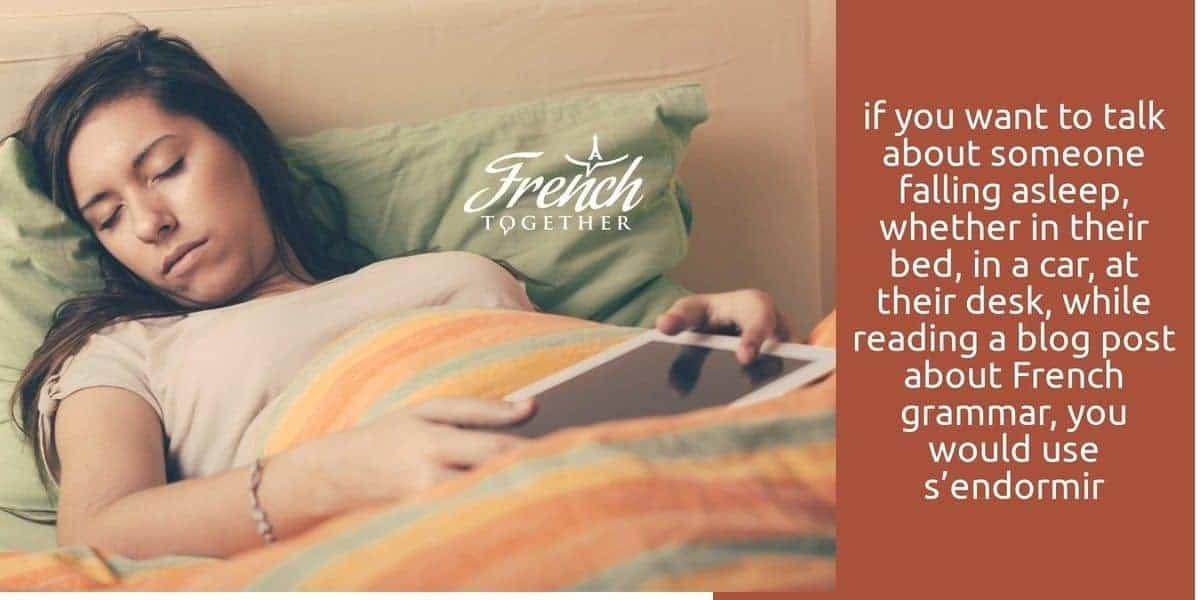 Long before I started learning French, I’d sing the line, Dormez-vous, dormez-vous? (Are you sleeping, are you sleeping?) from the international hit nursery rhyme “Frère Jacques”.

Maybe you did the same thing. Whether it’s the first French verb you ever uttered, or you’ve learned it more recently, let’s delve into dormir.

Dormir is the main verb used in French to talk about sleep and sleeping habits.

As French verbs go, it’s a pretty easy one, once you’re familiar with its irregular present forms with je, tu, and il/elle/on. When you hit vous, things go as expected, and it gets even easier from there: Its past simple form is conjugated with avoir, which means no having to worry about agreeing the past participle with the subject.  Also, its past participle is what you’d expect: dormi – no tricks or anything there.

But the fact that it’s an easy irregular verb isn’t what’s got me interested in dormir. Knowing how to use it and the many expressions associated with it is a surefire way to boost your French conversation skills.

After all, no matter how different we are culturally or on a personal level, sleeping is one of the things that makes people, people. How you or someone else sleep(s)/slept is a great topic to add to your French small talk arsenal!

Before we do that, though, if you don’t know how to conjugate dormir, or just want to brush up, here’s a helpful conjugation table.

Now, let’s check out our first set of expressions with dormir.

Talking about how you sleep or slept in French

Être bon dormeur/bonne dormeuse (To be a good sleeper)

If you also have kids or watch them, you’ll know why this is such a big deal.

Note that we don’t use an article before an action descriptor or job title in French, so there isn’t one here. Note also that if you want to talk about a female who’s a good sleeper, you’d say Elle est bonne dormeuse.

Être mauvais dormeur/mauvaise dormeuse (To be a bad sleeper)

Of course, the kid in your life (or pet, or you) might be the opposite: un mauvais dormeur or une mauvaise dormeuse.

This cool chart will give you some good French vocabulary words to explain why you constantly have cernes (bags/shadows) under your eyes.

Luckily, even mauvais dormeurs do occasionally get a break. If that happens, you can celebrate by saying J’ai bien dormi (I slept well). Or, if you didn’t, you can just think, J’ai mal dormi (I slept badly.)

You can use this expression in different tenses, depending on what you want to say, but note that the placement of bien and mal changes in the present tense.

In the present, this adverb comes after the verb – for example, Je dors mal sur ce lit. (I sleep badly on this bed).

On the other hand, for all other tenses, bien or mal comes after the verb.

Here are a few examples :

Simone and Frank would have slept badly if they had stayed here last night – our baby cried all night long!

Dormir avec: Sleeping with someone or something in a non-sexy way

A lot of people wonder how to say “to sleep with” someone or something in French. Hey, it’s a romantic language!

As I explained in a previous post, there are actually a few ways to do this, and each one has its own connotation.

Dormir avec is not the exciting one. Dormir avec generally means “to sleep with something or with someone in a non-sexy way.”

In French, se coucher means “to go to bed”. But if you want to talk about someone falling asleep, whether in their bed, in a car, at their desk, while reading a blog post about French grammar (hopefully not this one!), and so on, you would use a verb related to dormir: s’endormir.

I really like this verb because the en suggests entering or even nestling into sleep. Remember that s’endormir is a reflexive verb, so you do have to make sure it’s agreed with its subject. It also means that it’s conjugated with être in the past tense (here’s a conjugation table).

So, if I want to describe my night last night: Je me suis endormie en écoutant les ronronnements de mon chat. (I fell asleep listening to my cat’s purrs.)  Yes, I am a crazy cat lady, but if you knew how adorable and charming my cat is, you’d understand.

Notice that because I’m a girl, I added an “e” to the past participle. If my cat, a boy, were talking about his night, he’d say J’ai poussé la tête de ma maitresse avec mes pattes pour avoir plus de place sur son oreiller, puis je me suis endormi. (I pushed my owner’s head with my paws so that I could have more room on her pillow, then I fell asleep.)  — no “e” at the end of endormi.

How to say “asleep” in French

Knowing s’endormir comes in handy if you want to say that someone is asleep in French. In this case, you use the past participle, endormi(e).

NOTE: As this helpful Word Reference page points out, endormi(e) is never used immediately after a verb.  So, for example, in English you’d hear: “Where’s Jessica?” “Shh! She’s asleep.” But in French that would be: <<Où est Jessica?>> <<Chut! Elle dort.>> Essentially, you have to do the equivalent of using the present progressive form in English: “Shh! She’s sleeping.”

Another way to imply that someone is asleep is to use the present participle of dormir: dormant. This tends to be used in poetic or old-fashioned contexts. An example you may have come across is La belle au bois dormant – “Sleeping Beauty.”

Some common expressions with dormir

Now that we’ve got the basics down, let’s have a little fun.  There are many frequently used expressions with dormir. Here are some of the most common:

Dors bien means “Sleep well.” It tends to have a personal, tender connotation, so I wouldn’t use it with, say, a superior at work or a stranger.

That’s why Dormez bien is much less common (unless you’re talking to a group of people you’re in a close relationship with).

Sometimes, languages throw you for a loop by having words and expressions that are extremely similar, but mean something completely different, even to the point that it’s funny if you confuse them (navette (shuttle) and navet (turnip), I’m looking at you!).  That’s the case with these two dormir expressions.

The first, dormir debout, means “to sleep standing up” – in other words, to be so exhausted that you could sleep while you’re still awake and out in the world.

I was so tired this afternoon that I was sleeping standing up).

Obviously, this is not taken literally.

Because it would be crazy to actually sleep standing up, à dormir debout is a way to refer to something that’s complete nonsense.

I have to pay a euro to use the toilet? That’s ridiculous!

The French often make nicknames or derivatives of words by using their first syllable. So, dodo is short for “sleep.”

This word has a childish connotation. You can compare it to an expression like “night-night” in English. You’ll often see dodo used with children or, say, if a whimsical adult or character is talking.

The first lullaby in this compilation uses the word to almost hypnotic effect. It used to put my son to sleep when he was a baby. If you or a kid you’re caring for can’t faire dodo, it may be worth a listen.

To sleep with one eye open – in other words, you’re watchful and on the lookout for danger (real or not).

I was wrong to watch that horror movie before bed – I slept with one eye open.

Literally: to sleep a sleep of lead, this expression is used to show a really good, solid night of sleep, so it’s the opposite of the previous expression.

After the stress of the day, she slept like a stone.

You could also say dormir du sommeil du juste (o sleep the sleep of the just.)

This very pretty phrase means, simply, “to sleep outdoors”, usually in a positive or euphemistic way.

Since our car broke down, we’ll have to sleep under the stars tonight.

This is a very useful expression when you’re traveling or making plans with friends.

Since Laure drank a little, instead of driving, she’s going to sleep here.

Like many other languages, French has a number of expressions that show how well you slept by comparing your sleep to that of an animal, object, or even particular human being (dormir comme un bébé). You can sleep like anything from an angel (dormir comme un ange), to a groundhog (dormir comme une marmotte).

Example: Il faisait chaud mais grâce à la clim’, j’ai dormi comme une marmotte ! (It was hot but thanks to the air conditioning, I slept like a log!)

For more of these phrases, check out our article on sleep-related expressions in French.

Two common French sayings about sleep (that use dormir)

Those who sleep, eat. In other words, if you’re sleeping, you’re not hungry. This is one of my favorite expressions, and is a good excuse for why I eat so much, since I’m a mauvaise dormeuse!

This proverb lets journalists and quotable wits have a lot of fun. Type the phrase into an internet search engine and you’ll find many plays on words and a few great zingers, like this one by Pierre Dac: Si la fortune vient en dormant, ça n’empêche pas les emmerdements de venir au réveil. (If fortune comes from sleeping, that doesn’t stop problems from coming when you wake up.) or my favorite, by Caroline Otéro: La fortune vient en dormant, mais pas en dormant seule. (Fortune comes from sleeping, but not from sleeping by yourself.) In this case, using dormir to express the idea of sleeping with someone does have a sexual connotation.