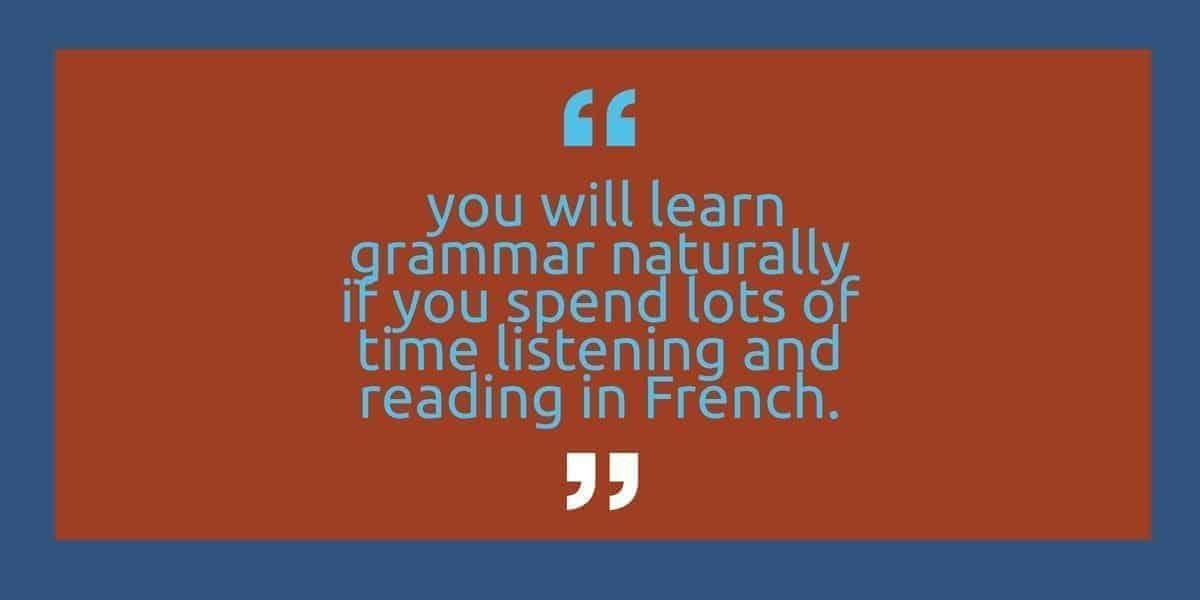 People always talk about what you need to do to speak French.

You need to learn the most common French words and phrases, you need to understand French grammar, and have a good pronunciation.

You need to get used to thinking in a new language.

But when it comes to learning how to speak French, what you don’t do is almost as important as what you do.

So here are 3 things you need to give up if you want to speak French!

#1 Give up your need to understand everything about French grammar

At school, I spent years learning grammar rules by heart.

The result? After thousands of hours learning English and German at school (I’m a native French speaker), I could barely speak English.

One day I decided to stop obsessing over grammar rules and watch British and American TV series and find a conversation partner instead.

Binge watching TV series and speaking broken English did wonders for my English.

And I’m proud to say I now speak English fluently.

The truth is, you don’t need to learn grammar rules by heart to speak French correctly because you will learn grammar naturally if you spend lots of time listening and reading in French.

Try asking a French person why they say something the way they say it.

More often than not, you’ll hear “I don’t know, it just feels right”.

That’s because they intuitively know whether something is correct or not.

Their knowledge of grammar rules comes from experience, not from learning rules by heart.

Knowing rules can help you learn faster. For example, knowing that most words ending in “e” are feminine will save you lots of time.

But ultimately, nothing replaces exposure to the language. Learning useful patterns and rules should be the icing on the cake.

Give up your need to always try to understand how everything works right away and focus on learning useful everyday phrases and you will learn French faster (and understand many grammar concepts intuitively).

#2 Give up your fear of speaking French

As a beginner, your first conversations will be short but you’ll quickly be able to say more and more until you realize you can now speak French fluently.

Don’t know how to get started? Click here to discover how to find the perfect conversation partner!

Translating is a great way to learn French.

It helps you use your knowledge of English to quickly understand how the French language works (the two languages are much more similar than you may think) and save lots of time.

But it can also be dangerous because translating trains your brain to rely on tools and prevents you from thinking in French.

If you can’t understand anything written in your French book without a dictionary, you need an easier book to read.

If you need to read all subtitles while watching a French movie, you need to watch a movie that’s easier to understand.

The only goal of translation is to help you close gaps and understand a few unknown words and phrases you can’t understand from context alone.

If you translate everything, you won’t enjoy the experience because it’s frustrating and won’t memorize anything because you will learn too many new words and phrases at once.

I have taught French to thousands of French learners over the year. Some were 80, others were 20 or even 13.

Some were busy executives while others were unemployed. Some could afford to go to France for a few months while others couldn’t.

Many of them now speak French and succeeded not because they had lots of free time, were good at languages or young but because they believed in themselves.

You don’t need to be young, have a lot of time and be good at languages to speak French, you simply need to use the right method and never give up.

You may need to spend more time studying if you are older, you may need a few months more if you can’t study more than 15 minutes a day but you will eventually get there if you believe in yourself and spend time learning French a little bit every day.

People who speak French with confidence aren’t necessarily the smartest the youngest or the people with the most free time, they are the ones who understand that learning how to speak French takes time and were willing to take the time to get there.

Believe in yourself, dedicate time to learning with the right French course and you will speak French with confidence one day!

And you? What did you have to give up in order to speak French?

10 thoughts on “How to speak French: 4 Things You Need to Give Up to Succeed”