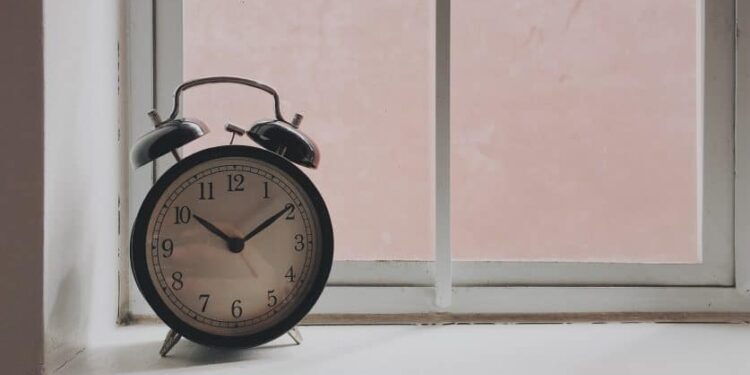 Telling the time in French isn’t the easiest thing in the world and can even be quite confusing at first if you come from a country that doesn’t use the 24-hour clock.

Luckily, it becomes a lot easier once you understand a few basic concepts and know the most important time-related vocabulary.

Let’s spend some time learning how to do it and learn useful rules and expressions related to telling the time in French!

How do you tell the time in French?

All you need to do, of course, is add the number of hours it is. For instance, Il est 9 heures – It’s nine o’clock.

Note that the word heure has to agree with the number of hours. So if there’s more than one, it gets an “s” tacked to the end when written. When you say it, as with most French words, the “s” is silent.

The word heure can also mean “hour”, as you probably already knew. Unlike in English, this word is always used when telling time, even when there are minutes.

As you may have noticed from the last example, to add minutes to the time in French, place them after the word heure(s). Here’s another example: Il est 11 heures 35. (It’s 11:35.).

When writing the time, the French usually use just an “h” to stand in for “heures”, so you’d typically see this statement written as Il est 11h35.

In certain cases, such as departure and arrival boards in some train stations and airports, you may see the h replaced by a colon (:).

You might be thinking that telling time in French is pretty easy, and you’re right!  But there is one thing that might be tricky at first, depending on how you tell time in your native country:  The French use the 24-hour clock.

This means that most of the time, any hour from 1pm to 12am corresponds to a number from 13 to 0.

The twenty-four hour clock in French

Using twenty-four hours to tell time, instead of the numbers 1-12 differentiated by “am” and “pm” can be confusing at first. But when you get used to it, you’ll understand why the French, who value logic and concision, have adopted this system.

Namely, it’s really hard to be confused about what time something takes place, and you don’t need to spend extra time or use extra space saying or writing “am” or “pm”.

Note that while you will see 0h on clocks, timetables, and other places the time is set down in writing, the French don’t say “0 heures” the way we might say 12am. Instead, they always say minuit (midnight).

This remains the case when minutes are added after. So, 0h25 is said “minuit vingt-cinq“.

The same goes for 12h, for that matter. The French rarely say douze heures. Instead, they say midi (noon). And as with minuit, the word midi is said with minutes after it, as well. For example: 12h = midi./12h46= midi quarante-six.

Do you have to use the twenty-four hour clock when telling time in French?

That said, if you’re really stuck, you can use the 12-hour clock in French, although it’s not the best way. Generally, a person will understand what time you mean based on the context, as in English. For instance, if someone asks what time it is and it’s clearly daylight outside, if you say Il est trois heures instead of Il est quinze heures, the person will understand what you mean.

It’s more complicated, though, if you’re talking about past or future events. In that case, you’d need to add additional details. For instance: On a rendez-vous ce soir à 8h. (We’re meeting tonight at 8pm.)

So, while it’s good to know that you have the 12-hour clock to fall back on, it’s unquestionably best to learn to use the 24-hour clock in French.

I just spoke about using additional time-related words to show what time it is if you use the 12-hour clock (not ideal). But there are often times when the French use words to emphasize how early or late something is, just as we might do in English.

For example: Pourquoi tu m’appelles ? Il est 4h du matin ! (Why are you calling me? It’s four in the morning!)

Note that, as you can see in the example, “in the morning” is du matin (literally “of the morning”) in French. The same goes for “in the evening/at night” (du soir) and “in the afternoon” (de l’après-midi).

Of course, you won’t only use this type of structure. Here’s another common example: Son train part ce soir à 21h15. (Her train leaves tonight at 9:15pm.) This time, the prepositions involved are the same as they would be in English.

In English, when telling time, some people prefer to use expressions like “quarter past”, “quarter to”, “to/till”, and “half past”, rather than just saying the hour followed by the minutes. If you’re one of these people, you’ll be happy to know that the situation is the same in French.

Here’s how to say these phrases in French:

As in English, not everyone will use these expressions instead of simply saying the number of minutes, but they are fairly common, especially et demi. This means that it’s at least good to understand and recognize them.

How to ask “What time is it?” in French

Now  you know how to tell the time in French, but you may be wondering how to ask what time it is.

The most common way to ask “What time is it?” in French is Quelle heure est-il ? but it’s not the only way.

As you can see, the word le temps is never used when talking about telling time in French; this word refers more to the concept of time. Heure is your go-to word when it comes to asking or telling what time it is in French.

Excuse me, sir, what time is it?

How can you practice telling the time in French?

One of the easiest ways to practice telling the time in French is to use your watch, phone, or clock to quiz yourself throughout the day. See how quickly you can say the time you see, in French – especially when it comes to using the 24-hour clock.

You can check out our article on the numbers in French if you need to brush up on them.

Reading and listening to French is also an excellent way to get used to telling time in French. Our list of free French reading, watching, and listening resources is a good place to start.

I’d also suggest this article if you want to learn some additional French time vocabulary.

I hope you found this article on how to tell the time in French helpful. Quelle heure est-il chez toi ?