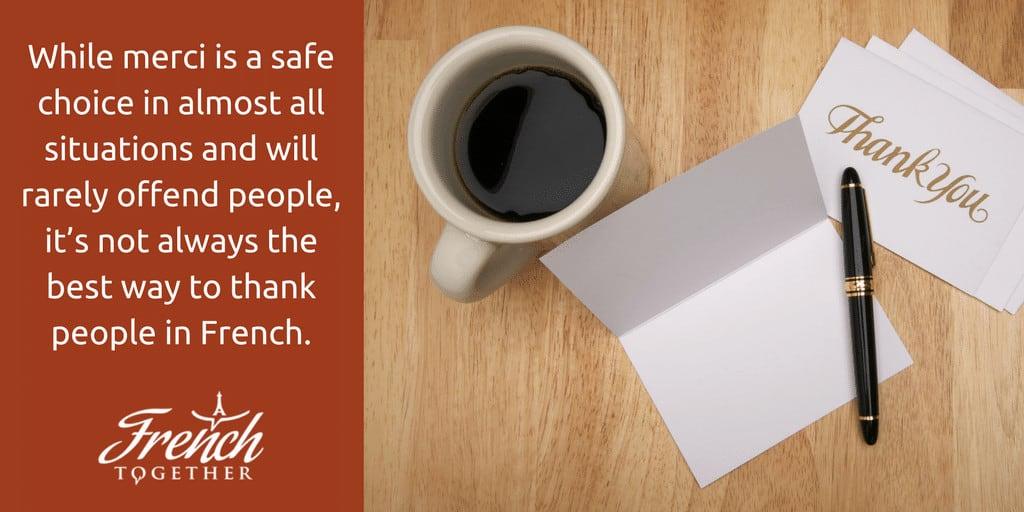 Imagine that your French friend Marie just picked you up at the airport in Paris and hosted you in her lovely home for 3 days.

You are grateful and would like to thank her so you say merci when you leave and give her a box full of delicacies from your hometown.

Then you wonder: isn’t’t there a better way to say thank you in French? Merci did feel a bit…short.

While merci is a safe choice in almost all situations and will rarely offend people, it’s not always the best way to thank people in French.

Here are 23 ways to say thank you in French!

Merci  is the most common way to say thank you or thanks in French.

You can use it whether you’re talking to your best friend, a seller, a waiter or your boss without any risk of offending anyone.

However, it may be considered a bit cold and short depending on the context.

That’s why it’s often better to expand on the basic merci and use one these common variations:

Sometimes you may also hear these alternative ways of saying thank you in French:

Be aware that merci bien can be perceived as sarcastic depending on the context so I would recommend you to use merci beaucoup instead.

Merci bien, mais j’ai pas que ça à faire !
Thanks a lot, but I have better things to do!

If you want to sound more formal, simply add monsieur or madame after merci.

If you want to thank a person for something specific, add pour (for) after merci:

je vous remercie: I thank you

When you want to thank a group of person or highlight the person you’re saying thank you to, you can use one of the following sentences:

These two sentences are generally considered more formal than a simple merci.

Like with merci, you can also use variations of je vous remercie such as:

Just remember that these 4 ways to say thank you in French are rather formal and mostly used in letters.

Using them in everyday situations or in informal emails or Facebook conversations would be strange.

If someone just offered you a gift or did something nice, you can thank them by saying c’est vraiment gentil de votre part (it’s really kind of you).

As always in French, the votre version is formal while the ta version is informal. That’s because there are two ways to say you in French.

Literally “with all my/our thanks”, avec tous mes/nos remerciements is a good choice when writing a formal letter or email or when you’re writing to a group of people you don’t know well.

If you want to ask someone to thank someone else for you, you can use Remerciez-le /la de ma part (thank him/her for me).

If you want to ask someone to thank a group of people, you can say remerciez-les de ma part (thank them for me.)

This one is for when you feel extra thankful. It literally means “thank you a thousand times.” Its closest English equivalent would be “thanks a million.”

You will mostly hear this French thank you as a reply to someone thanking someone else. Think of it as the equivalent of “No, thank you” when you want to emphasize that you are the one who should be thankful, not the person who just thanked you.

A common equivalent is c’est moi qui vous remercie (literally: it is I who thank you.)

How to answer thank you in French

The most common way to say you’re welcome in French is de rien but there are many alternatives such as:

You can discover other ways to say you are welcome in French in this article.

And you, what’s your favorite way of saying “thank you” in French?