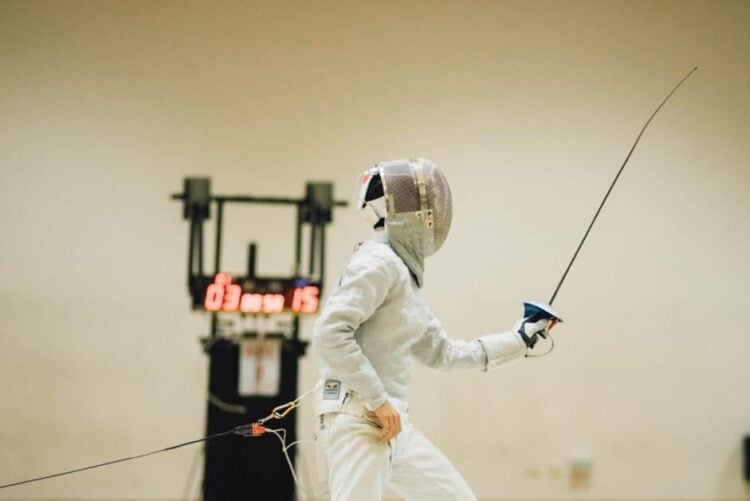 Many of us change, at least a little, after we travel abroad. The same can be said for the word touché.

Touché is a French word that’s found its way into English. For Anglophones, saying “Touché” either  means “You hit me with the tip of your foil” if you’re fencing  or “Wow, that was the perfect retort/You made a really good point.”

But as is often the case with words adopted into other languages, touché isn’t always used the same way in French as it is in English.

Let’s look at the meaning of touché in French – or, rather, meanings, since there are quite a few.

Table of Contents
How do you say “Touché!” in French?
What does touché mean in French?
The other toucher
The verb se toucher

Touché can have lots of meanings in French. But only one of those – touché as a fencing term – is the same in English.

In French, touché isn’t typically used to express “nice one” or “fair enough” in French. It may be possible, depending on the situation – maybe some fencing champions are bantering? – but it’s not really a thing. So, how do you express this way of using  touché in French?

Depending on things like the situation and who’s speaking, there are a number of ways to express it. The most typical ones are bien vu or très juste.

If I wear this, no girl will want to go out with me.

No girl wants to go out with you now anyway.

What does touché mean in French?

Touché doesn’t mean quite the same thing in French as it does in English. So, what does it mean in French?

Outside of fencing, touché isn’t likely to be a stand-alone word or interjection in French.

Touché is a participle of the verb toucher, which has several meanings. Because it’s an adjective or participle, there are times when touché will have to agree with another part of a phrase or sentence. So you will sometimes have to write it: touchée, touchés, or touchées.

Here are the most common ways you’ll see touché used in French:

To be physically touched or hit by something

This is where the fencing term touché comes from – literally, to be touched by the tip of the fencing foil. In French, touché can extend to other weapons, as well. For instance: Elle a été touchée par 5 balles. (She was hit by five bullets.)

To physically touch something or someone

Note that in French, toucher often tends to be replaced by a more precise verb, for instance palper, caresser, tatonner, etc.

With this definition in mind, as well as the “hitting” one, a button on a keyboard or phone is called une touche.

To be emotionally affected by something

This is the equivalent of the English “touched” or “moved”.  For instance, Son cadeau m’a touché. (His present really moved/touched me.)

To be affected by something in a non-physical way, usually in a negative sense

In the French press, you’ll often see statements like La ville a été touchée par la crise. (The city has been hit by the financial crisis.).

Toucher can sometimes be used as a past participle or adjective when referring to coming into or earning money.  For instance, Ils ont touché 10.000 euros d’allocations cette année. (They got 10,000 euros of benefits this year.)

La navette a touché le sol. (The space shuttle has touched the ground.)

You can find other meanings and uses of the verb toucherin this Word Reference entry.

Related to touché and toucher is the noun le toucher. This is the French word for “sense of touch”.

When toucher becomes a reflexive verb, watch out! It can be used in an innocent way, to show placement, for instance: Les deux parties du jardin se touchent (The two parts of the garden touch each other/are connected).

But most of the time it means “to touch oneself” and of course that usually means touching one’s naughty bits!

So there’s the difference between touché in English and touché in French. The overall takeaway is that touché is more or less the equivalent of touch or touch on in English, with a few exceptions.

I’ll leave you with a quote that I hope touches you – and helps you remember one of its most common uses:

1 thought on “What does touché mean exactly?”