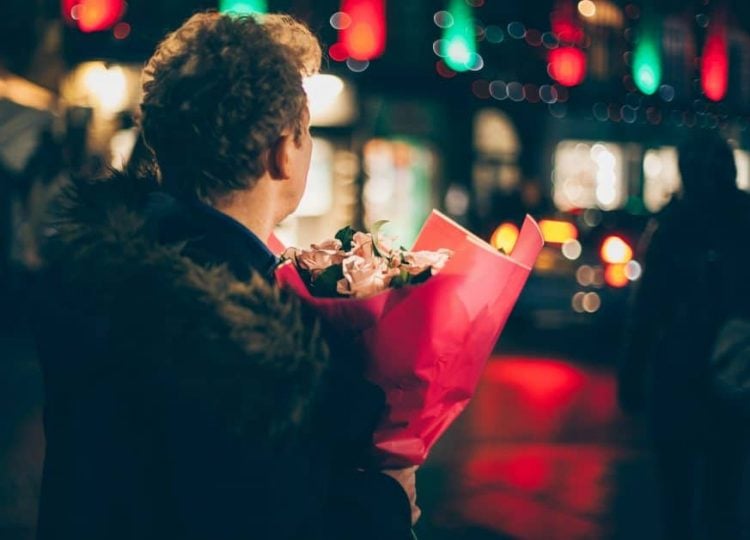 A lot of people think that there’s nothing more romantic than being in France on Valentine’s Day.

They’re not totally wrong; France is a beautiful country full of opportunities for romance.

But Valentine’s Day in France may not be any more romantic than any other day of the year. Let’s find out why.

Valentine’s Day began as a Catholic holiday, and since France remains heavily influenced by its Catholic past (or present, for those who are practicing Catholics), the day is an official feast day, which is why it’s feminine in French: la Saint-Valentin, short for la fête de Saint Valentin (the feast day of Saint Valentine).

That said, it’s not celebrated as widely or in as big a way in France as it is in many other countries.

I think there are two main reasons for this:

1. The French don’t tend to be overtly romantic.

I’ve written before about how the French don’t tend to express their emotions in an extreme way,  especially when it comes to positive emotions. It’s seen as suspicious, false, and/or ridiculous. There are, of course, some exceptions, and just because someone isn’t extremely demonstrative doesn’t mean they don’t feel things deeply. It’s just that most French people don’t like to put their feelings on display in a big way.

And so, a holiday where your heart can literally be in your hands, in the form of a card or chocolate, doesn’t appeal to a lot of French people. Those who do celebrate Valentine’s Day, as we’ll see, tend to do it in a more sober way than people in many other countries.

2. This dislike of overt emotion extends to Valentine’s Day gift-giving.

A survey conducted in early 2020 found that only 56% of French people were planning to spend money for Valentine’s Day. And those who do spend usually don’t splash out. For instance, the average French man will spend about half of what the average American man would.

If you’re really into Valentine’s Day, all of this might have bummed you out. But if you’ve never liked this holiday, or if you’re single and not feeling it this year, the good news is that French Valentine’s Day is low-key enough that most people probably won’t feel bad or ostracized because they didn’t get a date or gift.

How Valentine’s Day is different in France

Here are a few other ways that Valentine’s Day in France may be different from how it’s celebrated in your country.

In many countries, a heart-shaped box of chocolates is a classic romantic gift. The French do give chocolates as gifts (it’s one of the things I love most about living here), but rarely as a romantic gesture. Instead, chocolates are regularly exchanged with family, friends, colleagues, and teachers during the winter holidays, or as a thank-you gift or to celebrate a special occasion.

So, what are the most common French Valentine’s Day gifts? According to a 2019 survey, 76% of French people will take their beloved to a restaurant. The other top two gifts are jewelry and flowers. Again, notice that none of these are cute gifts like stuffed animals or Valentine’s Day cards.

They may have been popular in the past, and they do still exist, but it’s very rare for French people to send or give each other valentines.

That also means that….

French children don’t make or give out Valentine’s Day cards.

Not so in France. Valentine’s Day is a couples-only holiday here, and not at all geared towards children and families. The same goes for friends. It would be weird to wish a French friend Joyeuse Saint-Valentin (Happy Valentine’s Day).

The one French Valentine’s Day exception: Love messages in Paris

So, the French aren’t usually into demonstrative expressions of love, Valentine’s Day or not. But there is one exception.

Every year, Paris residents can submit a short message to the person they love (nowadays, this is done by internet, via the City of Paris’s official website). On Valentine’s Day, thousands of these messages will be posted for a few seconds each on the electronic announcement boards that are set up around the city. It’s a really nice tradition, and even if you’re not a romantic, it feels good to see something positive on those bright panels.

You can see an example of one of these love messages on the City of Paris’s official website. And check back there on or shortly after Valentine’s Day to read the messages online!

You may be wondering how to say a few key Valentine’s Day words and phrases in French. We’ll get into that in just a moment, but before we begin, note that there’s no way to say “Be my valentine” or “my valentine” in French.

But in general, you would just tell someone you love or like them, and/or ask them out. You can check out our article on how to say “I love you” in French for a number of different ways to bare your heart.

Here are some Valentine’s Day words that do have French equivalents:

déclarer sa flamme – to declare your love to someone. Literally, “to declare your flame”, the flame of love that’s inside you. Isn’t that romantic?  There are less metaphorical ways to express this, for instance, dire ce que je ressens pour lui (to say what I feel for him/her) or lui dire que je suis amoureux/amoureuse de lui (tell him/her that I’m in love with him/her ).

être amoureux/amoureuse (de) – to be in love (with)

sortir avec – to go out on a date with. Note that this can also mean “to be dating”. For example: Nous sommes sortis ensemble pour la Saint-Valentin (We went on a date for Valentine’s Day) or Tu es amoureux de Sophie ? Mais ça ne va pas, elle sort avec Marc. (You’re in love with Sophie ? That’s not good, she’s dating Marc.)

How to ask someone out in French

Since there’s no specific way to ask someone to be your valentine in French, you can just ask them to go out on a date with you.  There are many ways to do this, depending on the situation, context, etc., but here are two very basic ones:

Voudrais-tu sortir avec moi ? – Would you like to date/go out with me?

Voudrais-tu diner avec moi ? – Would you like to go out to dinner with me?

This article includes some other ways to ask someone out in French.

Remember that whenever you’re asking a person on a date, you would use the tu form, since you should already know them and there shouldn’t be a need for formality.

How to ask a French person to sleep with you

This is a very delicate question, of course, and you should probably just ask them out and let things evolve naturally. But say you’re in a seductive, lingering moment and you want to make it very clear how you feel and what you’d like to do.

In that case, the most basic (yet simultaneously polite, sexy, and honest) way to express this would be: J’ai très envie de faire l’amour avec toi

Of course, as with asking someone out, there are other ways you might express this, depending on the context, etc. But that phrase should work in most situations.

On the other hand, NEVER ask a French person Voulez-vous coucher avec moi?

As we explained in a previous post, this phrase is famous for being in a song, but is actually odd to native French speakers, since it uses vous to talk about something intimate, instead of tu. Plus, it’s very direct and in most cases it’s best to be a little more polite and subtle. That isn’t just a general rule, but especially important because standard French tends to be a bit more polite than some other languages, including English.

And on that note, remember that while French people may have the reputation of being sexy and open-minded, randomly asking someone to sleep with you isn’t cool in any culture and probably won’t be taken well.

Some other ways to declare your love in French

Maybe you still want to be a little more romantic with your French chéri(e) on Valentine’s Day. If you’ve already read our article on how to say I love you in French, but want to go bigger, you might just find what you’re looking for in our list of French love quotes.

Do you like the French approach to Valentine’s Day? Have you ever been in France on this day? Feel free to share your thoughts in the comments!

Joyeuse Saint-Valentin (Happy Valentine’s Day) to those who celebrate! And to those who don’t, why not do something for yourself to make the day special?