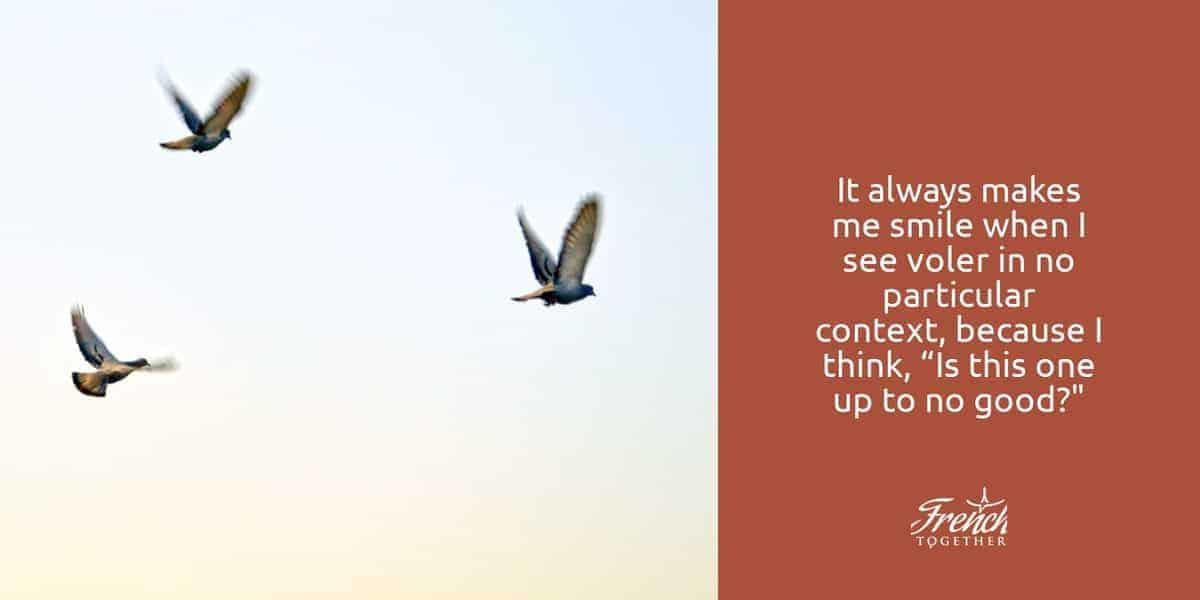 On the surface, the French verb voler is simple and straightforward. It’s a regular verb that doesn’t bend the rules in any way.

But when it comes to what it means, that’s when you discover that there’s more to it than you think. Voler means “to fly” – but it also means “to steal”.

It always makes me smile when I see voler in no particular context, because I think, “Is this one up to no good?”

Let’s find out how to conjugate and use voler, and dive a bit into why such a seemingly unremarkable verb is leading an exciting double life.

How to conjugate voler

Voler is a regular -er verb. In compound tenses, it’s conjugated with the auxiliary avoir, which is the easiest one, since it means that in most cases, there’s no verb agreement to worry about.

That being said, remember that, as with all French verbs, when used as an adjective, voler does have to agree with the word it’s modifying. For example, you can say un moment volé (a stolen moment) but you’d have to add an “e” if the stolen thing in question is feminine: une oeuvre volée (a stolen work (of art)).

How to use voler to talk about flying

When it means “to fly”, voler is pretty straightforward as a verb. If you want to say someone or something is flying/flies/flew/will fly/would fly, etc., you simply place it before the verb, like so: L’oiseau vole. (The bird is flying./The bird flies.) The same if it’s negative: Les pingouins ne volent pas. (Penguins don’t fly.)

When it comes to using voler as an adjective, the past participle, volé(e),  isn’t usually used, since it would translate to “flown”. It would sound strange to say “a flown airplane” or “a flown bird”.

To express that something has flown away, you’d use envolé(e), a word we’ll discuss a little later on.

If you want to say that something flies or is in the process of flying, but shouldn’t normally be, you’d use the gerund, volant(e). For example: La sorcière a un balai volant (The witch has a flying broom.). Or Regarde-moi ca – un gateau volant! C’est incroyable! (Look at that – a flying cake! It’s incredible!).

When you’re talking about something that is in the process of flying, you would have to describe it with a conjugated verb and phrase, for example, Voila un avion qui vole. (Here’s a plane that’s flying.). Generally, though, when you’re talking about a being or object that inherently flies, you would simply use it as a subject in a sentence: L’avion vole dans le ciel. (The plane is flying/flies in the sky.)

If you want to talk about making or causing someone or something else to fly, you use the phrase faire voler. For example, La sorcière a fait voler le crapaud. (The witch made the toad fly.)

How to use voler to talk about stealing

Like being a good voleur (thief), using voler  to talk about stealing involves some subtlety.

Let’s start with something simple. You can say, « Le cambrioleur a volé une télé. » (The burglar stole a TV.)

But if what you want to say involves the victim of a theft, the structure is more complex. The victim becomes an indirect object. That’s not all – you then have to choose from one of three main ways to express that something has been stolen from someone:

On a volé mon portable. (Someone stole my mobile phone.) This is a neutral statement that is fine in any context, in spoken or written language, etc.

On m’a volé mon portable. (Someone stole my mobile phone (from me.)). This phrase has more or less the same meaning as the first sentence, but you may notice that it’s a bit redundant. We already know that the cell phone belongs to the speaker, so why use a reflexive pronoun on top of that?  The answer is, simply, that this is an expression that’s used in everyday oral French, so grammar and redundancy aren’t as policed as they are in written French. Although it’s not the most eloquent or efficient way to express this idea, it’s a structure that’s so commonly used in spoken French that you should become familiar with it.

Je me suis fait voler mon portable. (I got my mobile phone stolen.) The phrase se faire voler implies that the victim of the theft is sort of responsible in some way. Maybe they weren’t paying attention and got pickpocketed, maybe they left their mobile phone somewhere and someone took it, etc.

It’s always interesting to me to hear people talk about their experiences with theft in French because of this choice. It used to make me feel sad for those who seem to blame themselves – and  most of the people I know who’ve had things stolen from them here, do.  Then, when I was almost pick-pocketed in the Metro a few years ago, I found myself using this phrase, too, since I should have been more vigilant. I still feel bad when anyone who’s had something stolen blames him- or herself, but I get it now.

There’s another slightly complicated thing to know about voler: It can refer to theft, or to cheating or ripping someone off. For example:  Deux euros pour une baguette! Ce boulanger vole tout le village! (Two euros for a baguette! This baker is ripping off the entire village !).

Notice that there is no preposition between voler and the victim here, and if a reflexive pronoun is used, there’s no direct object. This is a way to determine if someone is talking about being robbed or being cheated.

Common words and expressions related to voler (to fly)

un vol – a flight. This can be for airplane, bird, magical creature, etc. If you’ve ever traveled to or in a French-speaking country, you’ve probably seen or heard this word. Votre attention, s’il vous plait, on commence l’embarquement pour le vol 2019. (Ladies and gentlemen, boarding for flight 2019 is starting.)

s’envoler – to take flight. This can also be a more poetic choice than voler.

un OVNI (Objet Volant Non Identifié) – a UFO (Unidentified Flying Objet).  This can also be written in all lowercase letters (ovni). Unlike “UFO”, it’s pronounced, like most French acronyms, as a word, not letter-by-letter.

voler en éclats – to shatter (literally to fly to pieces). Example: Une fois tombée de son socle, la vase a volé en éclats. (Once it had fallen from its stand, the vase shattered into a million pieces.)

à vol d’oiseau – as the bird flies. In other words, the most direct way to get from one point to another, regardless of there being roads, etc. – exactly as a bird would see it if it were flying by and looking down. Example: Selon ce site, la distance à vol d’oiseau entre Paris et Londres est de 342,87 km. (According to this site, the distance between Paris and London is 342.87 kilometers as the crow flies.)

voler de ses propres ailes – to set out on your own, to be independent (literally, “to fly with one’s own wings”).

Ô temps, suspends ton vol !  – Oh time, suspend your flight!  I love poetry but somehow had never come across this line, by French poet Alphonse de Lamartine, until researching this article. Here’s the poem it comes from.

Common words and expressions related to voler (to steal)

Qui vole un oeuf vole un bœuf. – Give them an inch and they’ll take a mile. In other words, if you give someone just a little leeway, they’ll totally take advantage of you.

You can find more words and expressions derived from voler via this list, as well as this one.

Why does voler mean “to fly” AND “to steal”?

For many years, I have loved the verb voler  because of its intriguing double life, and because of the way I imagined that had come about. I figured the connection with stealing began as a poetic way to describe a well-executed theft: the object disappeared so fast that it was as if it had flown away (or into the hands of the master thief).

Looking into etymology, it turns out that connection isn’t correct at all. But the actual reason for the connection is still pretty cool.  According to this source, the verb voler was first used to describe flight; it’s a direct descendent of the Latin verb volare.

Then, several centuries after French had evolved more or less into the language we know today, falconry (i.e. hunting with birds of prey) was an immensely popular pastime among the French nobility. The term voler began to be used in lieu of other terms, to describe what happens when a falcon (or other bird used in falconry) flies away from its master, taking the bells tied to its talons with it.

So, although my original theory is totally incorrect, there is still a sort of tie between voler’s two meanings: flight, and your falcon stealing away from you.

And now, some French songs to steal your hearts (or to let them take flight)

Although voler is verb with two powerful and potentially poetic meanings, there aren’t all that many famous songs or other pop culture references that include them in their title. Still, it’s nice to have a little music, and songs can help with vocabulary memorization. So, here are three songs by famous Francophone artists that involve one of the meanings of voler.

Voler by Michel Sardou and Celine Dion. If you like emotional , theatrical, dare I say cheesy, songs by great francophone artists, give this one a listen.

Au Voleur by Charles Aznavour. Another legendary francophone singer takes on the other meaning of voler, and tells quite a story (you can read the lyrics here).

Je vole – This song is performed by a contemporary French music star Louane  in the movie La famille Bélier. The song is universal and moving, and the film, about a hearing teenager in an eccentric, all-deaf family who dreams of becoming a singer, is worth a watch.

Which meaning of voler most intrigues you? Can you use both in the same sentence?  If so, à vous de me voler la vedette! Leave your answer in the comments!

11 thoughts on “Voler: A Mild-Mannered French Verb with an Exciting Double Life”