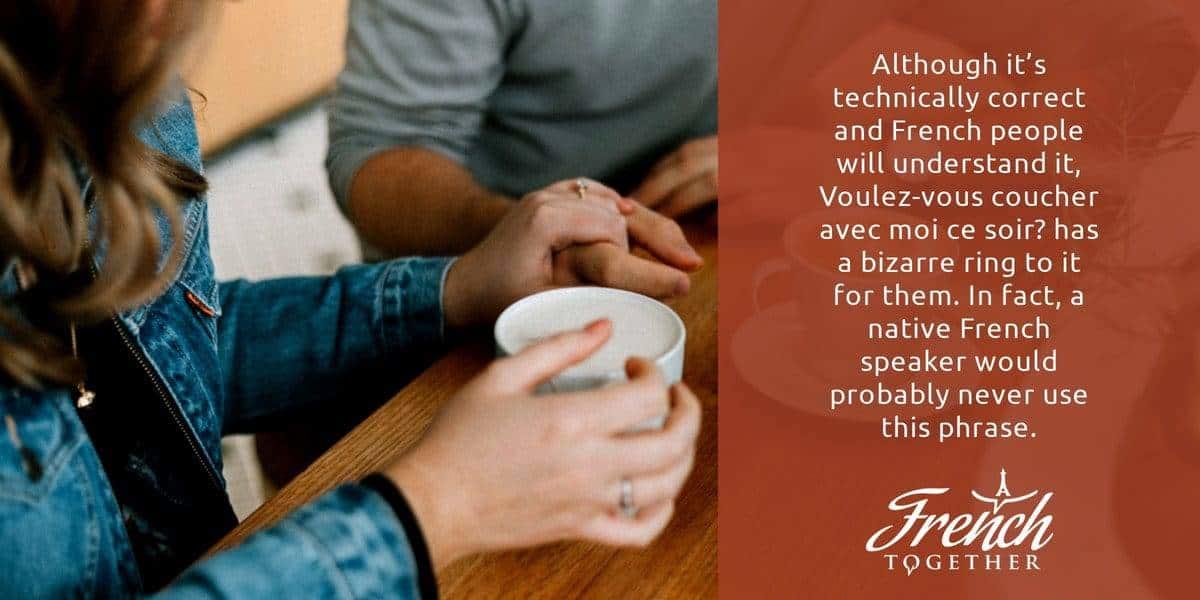 Before you started learning French, there’s a phrase you might have already been familiar with: Voulez-vous coucher avec moi ce soir?

A quick online search will show you you’re not alone. You’ll easily find dozens of stories of tourists or French students spouting out this question, sometimes without even knowing what it means, and always with cringeworthy results.

Why the cringe-worthiness? For one thing, although it’s technically correct and French people will understand it, Voulez-vous coucher avec moi ce soir? has a bizarre ring to it for French native speakers.

For another, just blurting out this sentence or asking it to someone in earnest is forward at best, and offensive at worst.

Let’s look at why Voulez-vous coucher avec moi ce soir?  is so well-known around the world, and why you probably shouldn’t say it to a French person.

Why does everyone know the phrase Voulez -vous coucher avec moi ?

It turns out that what seems to be an iconic French phrase was actually popularized by foreign speakers.

In 1921, American writer John Dos Passos used it in his book Three Soldiers, albeit deliberately misspelled and minus the ce soir. This is the first recorded use of the phrase. Not long after, E.E. Cummings (one of my favorite poets, for what it’s worth), included the phrase Voulez-vous coucher avec moi in his poem “Little Ladies”.  It was also used in Tennessee Williams’s famous 1947 play “A Streetcar Named Desire”, this time with ce soir added.

A few decades later, it soared to popularity thanks to disco!  In 1974, the Patti LaBelle-fronted group Labelle released the ultra-catchy “Lady Marmalade”, a song about a New Orleans prostitute who says the now-famous line.

People of my generation are probably more familiar with the 2001 remake of the French song featuring Christina Aguilera, Mya, Pink, and Lil’ Kim (as well as a cameo by Missy Elliott), for the movie Moulin Rouge!.

As a language learner, you probably know that it’s often easier to memorize things when they’re in song form, and that’s what seems to have happened here: Voulez-vous coucher avec moi ce soir? is sung to a really catchy tune that sticks in your head, in an era when music has gone global. It was bound to become famous.

Let’s break it down: Voulez-vous is the inverted form of Vous voulez – that is, “Do you want?”  This is followed by coucher – “to sleep”, then avec moi – “with me”, and to finish it off, ce soir – “this evening/tonight”.

If this phrase is engraved in your brain, there’s good news: You can use it to help you remember the basic structure of inverted interrogative French sentences:

1. the conjugated verb (in this case, Voulez)

4. a noun or a second verb (in the infinitive) (in this case, coucher)

5. Any additional elements (in this case, avec moi ce soir)

Try it with any question you like. For example, here’s a question I ask in order to gauge just what sort of person I’m talking to: Aimez-vous les chats ou les chiens? (Do you like cats or dogs?).

Here’s another question, this time with a second verb: Veux-tu aller à la plage demain ? (Do you want to go to the beach tomorrow?)

That’s because, although it’s grammatically correct, the use of vous, the formal form of “you”, with an invitation to such an intimate act is jarring to most French people. If a French person were forward enough to ask you to sleep with them outright, even if they didn’t know you well, they would use the informal tu.

If you’ve ever been hit on in France, you’ve probably discovered this already.

When would you say “Voulez-vous coucher avec moi ce soir ?”

So, what’s the deal? Is this phrase just an American author’s mistake?

It doesn’t seem likely, since other writers seem to have heard it, as well. This is where it gets interesting.

John Dos Passos and E.E. Cummings were two free-spirited writers who spent time in Paris in an era where maisons closes (brothels) and prostitution were legal and fairly common. This makes me wonder if the phrase is something that they heard prostitutes say, either to address the crowd of passersby (don’t forget that vous can also signify multiple people) or simply to add a note of politeness/professionalism to the forward question.

I’m not the only one who’s wondered about this. And in Cummings’ poem “Little Ladies”, the phrase is spoken by a French prostitute (or, at least, the speaker’s memory of one). So it seems like this theory is probably correct.

So, what do I say if I want a French person to sleep with me?

Prostitution is still legal in France today, although maisons closes are not, due to a law that forbids pimping. If you say “Voulez-vous coucher avec moi ce soir?” to a French prostitute today, they probably won’t bat an eye – business is business. But they won’t ever say this to you.

As for the general population, don’t believe the stereotypes. French people are not super-sexual beings who declare their passions and desires without any kind of shame or restraint.

The French may be a bit more open about certain things, but it’s still considered incredibly forward and rude to walk up to someone and ask them to sleep with you, especially if you’ve never met them before.

Don’t let being in a foreign country make you completely lose your sense of respect.  And if you do, don’t worry – at the very least, the person you approached will ignore you; at worst, you’ll get slapped or maybe even beaten up. And then, there’s the law. In 2018, catcalling and other kinds of street harassment became a crime in France. Say something crude to someone and you’ll get hit with a 70 euro fine the first time, then a 3000 euro fine the next.

So even if you’re mad with desire for someone in France, try to act normal. Be polite and non-threatening. Offer to buy them a drink and get to know them. And of course, be prepared for rejection even if you’re on your best behavior. Contrary to what pop culture often shows, French people don’t just sleep with anyone they meet.

It’s important to say all of this, but I haven’t really answered the question, have I? What if you’re in a situation where you can reasonably think the person you’re talking to might be interested in getting it on (to reference another 70’s music hit) with you?  How can you ask if they’re up for it?

So much depends on context and on your relationship. Flirting is an art, and so is communication.  And of course, when it comes to physical things, it often just…happens, without much planning in advance.

As the author of the article points out, the first example still feels a bit formal, since inverted questions in spoken French tend to have that connotation. So, the second example works better. I especially like it because it includes envie, which is often used to express bold sexual desire — J’ai envie de toi, for example, means “I want you.”

That said, both of these phrases also have a slight, sour note to me, as they probably do for millions of other people who’ve been approached or harassed in France. There are times when you might be sitting in a park, reading a book or checking your phone and wearing clothes that certainly don’t inspire the phrase “Oh là là, ” and yet, out of nowhere, someone will approach you. They may be French, or they may be someone from another country who assumes that you’re “easy” since you’re French (or, at least, a seemingly available person in France).

Whether you look like Alain Delon or Brigitte Bardot in their heyday or a sketchy individual from the streets, heads up to people who do this: It is not attractive. It actually comes off as desperate, shallow (at least chat me up a bit and pretend to like me!), and even threatening.

So, to recap: If you were planning to go to France and ask every attractive person you see to sleep with you, no, it is not normal in France to ask someone you don’t know or barely know  to sleep with you.

If you’re in a relationship with someone, on the other hand, or you guys are in heavy flirtation mode and have been seeing each other for a while, you could say “J’ai très envie de faire l’amour avec toi” (I really want to make love to you/I really want you.).

Of course, keep in mind that no matter how you ask, there’s no guarantee the person you’re asking will say “Oui.”

When it comes to getting a French person to sleep with you, use your language skills in a different way. Learn to make conversation, ask questions, give the occasional compliment. Things should proceed naturally from there. Leave Voulez-vous coucher avec moi ce soir? on your bookshelves or the dancefloor.

14 thoughts on “What does “Voulez-vous coucher avec moi ?” mean – and do the French actually say it?”