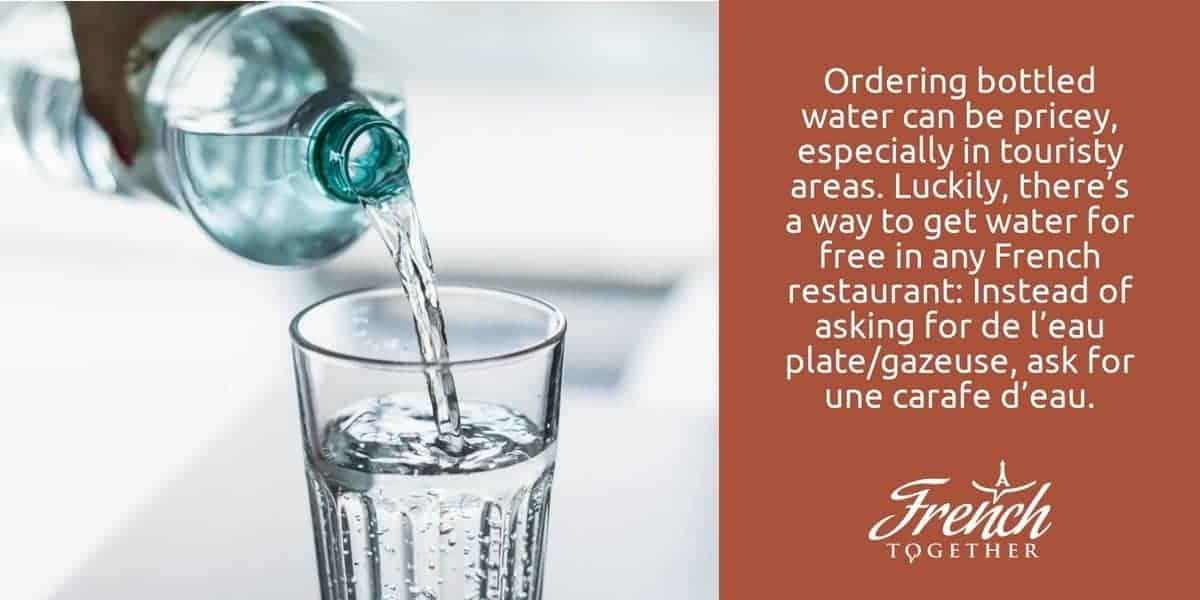 Of all the words that intimidate the beginner French students I’ve worked with, eau is in the top 10.  For speakers of many other languages, it’s such a strange combination of letters.  Eau — how the heck do you pronounce that?  Luckily, they soon learn that it’s much easier than it looks: it’s pronounced like the letter “O” in French (or English).

Eau is an important word to know, especially because French culture is a lot more water-oriented (or eau-riented, to make a terrible bilingual pun) than you might expect.

Let’s dive into all things water in French!

Pop quiz: What is the French’s favorite thing to drink? Most people would probably answer, “Wine.”  But it turns out that it’s actually…water!  According to this news segment, 99% of French people drink water at least once a day.

When it comes to what kind of water, that’s where things get less uniform. The same source reveals that 50% of French people don’t trust or like tap water because of things that are added to it (chlorine, etc.), an unpleasant taste, or regional issues like Paris’s infamous hard water (eau calcaire).

Can you drink tap water in France?

Although many French people prefer bottled water, in most places in France, tap water is perfectly okay to drink. Some locales, like Paris, even pride themselves on the quality of their tap water.

But there are a few regions or cities where, sadly, the water has been contaminated due to issues like pesticide runoff.  You can use this guide to see if this is the case in a place you’re headed.

Despite the fact that tap water is potable in most of France, eight out of ten French people just think bottled water is better, even though 75% of the population drinks both kinds.

This means that France is one of Europe’s major bottled water-consuming countries.

Unsurprisingly, there’s an impressive range of bottled water brands in France. They range from internationally-recognized names like Evian and Perrier, to regional brands, and even discount supermarket chain versions.

Some bottled waters have special functions, which means you should carefully read the label or even do online research before you drink any of them.

For example, Taillefine and Contrex are considered helpful for losing weight, due to their mineral compositions.  Hépar, with its high level of magnesium, is regularly used as a remedy for constipation, as I learned firsthand when my French mother-in-law started administering it to my often-constipated toddler.

Most bottled waters in France are pretty standard, though.  Choosing one may simply be an issue of price and/or taste.  Or maybe fancy bottling, like the pretty designs Evian sometimes comes out with.

Still vs sparkling water in French

If you order water in a restaurant and don’t specify, you’ll usually get sparkling water.  If you’re not a fan, make sure to ask for de l’eau plate.  And when you’re in a supermarket or self-service place, make sure you read a bottled water’s label; even if it has carbonation, it may not be obvious just by glancing at what’s inside.

Some famous brands of French sparkling water are the international icon Perrier, as well as Badoit, La Salvetat, and Saint-Yorre.

Who shouldn’t drink tap or bottled water in France?

Because there’s such a big market, French bottled waters have to set themselves apart.  Each one purports to come from a spring or a number of prestigious natural bodies of water, and to have its own unique blend of minerals.

This means, among other things, that anyone who has to avoid high concentrations of particular minerals, or who may have medical interaction issues with them, should read labels carefully.

This includes babies and young children, whose bodies may not be able to properly absorb high doses of certain minerals.

Although the tap water in most of France is safe, as a general rule, you should never give tap water to a newborn or infant.  For toddlers and older kids, as long as you’ve checked that the tap water is safe to drink, it should be fine.  My four-year-old regularly drinks the tap water here in Paris, for example.

If you have to prepare formula, or if your baby is old enough to drink water from time to time, the best way to be sure a bottled water brand is okay for them is to check the label.  If a type of bottled water is safe for newborns and infants, you’ll see the phrase convient à l’alimentation des nourrissons (approved for nourishing infants).  Often, there will also be a symbol like a baby bottle or baby face.  If you don’t see any of this, don’t let your baby drink that water.

All this may sound overwhelming, but don’t worry: I made bottles with bottled water here in France from the day my son was born, and I was always able to find different brands that were okay for infants.

As a general rule, for example, Evian is okay for all ages.  That was my go-to (although I usually tried to find a cheaper alternative first).

For toddlers and older kids, you should still be careful about what’s in the water, and Evian is still a good go-to. They’re smart about packaging, as well, with smaller-sized sports bottles that are made for children.  You’ll also find bottles like this from other brands, but always make sure the water inside them is okay for kids.

If you’re not sure if you or your kids should drink a type of bottled water, check if it’s labeled as being okay for infants; that means that it’s okay for pretty much anyone to drink.

How to order water in France

Now that we’ve got all that down, you might be imagining yourself having a refreshing drink of water in a café.  But how would you ask for it?

Normally, if you’re ordering a meal, the waiter will finish by asking you one of the following questions, or some slight variation:

– Vous désirez boire quelque chose ? (“What would you like to drink?”)

– Vous voulez boire quelque chose ? (in a more informal locale or if you’ve been bantering) (“What’ll you have to drink?”)

The simplest way to order is to say what you want and add s’il vous plait at the end.  For example, if you want still water, you can say, De l’eau plate, s’il vous plait.

You’ll normally be given a glass and the bottle. The waiter will usually open the bottle at the table so that you can see it’s new, and they may pour the first glass for you, as well.

For my fellow Americans and other ice cube fans: You may have noticed in the previous paragraph that I did not say the waiter will bring you a glass with ice. Drinks with ice in France are fairly uncommon, even in touristy restaurants.  You’ll usually have to ask if you want ice – for example, De l’eau plate, avec des glaçons, s’il vous plait. (“Still water with ice, please.”).  It’s possible that the restaurant may not have any, so be prepared.  Luckily, the water you order will usually be cold.

How to get free water in French restaurants

Ordering bottled water can be pricey, especially in touristy areas.  Luckily, there’s a way to get water for free in any French restaurant: Instead of asking for de l’eau plate/gazeuse, s’il vous plait, ask for une carafe d’eau. This means “a pitcher of (tap) water”.

As long as you’re in a region where the tap water is okay to drink, you should be fine, and you’ll have saved a few euros. The only downside is that the water may be served at room temperature, rather than cold, if that’s important to you. Refills for the carafe d’eau are also free, of course.  On the other hand, you can’t just ask for a carafe d’eau and nothing else.  It’s free, but with something you’ve ordered.

Liven up your water: The world of sirops

The French might get a bit bored if they only drank regular water.  That’s why there are sirops — sugary flavored syrups that you can add to drinks.  They come in a wide range of flavors, with the most popular being menthe (mint) and grenadine, a mix of red fruit flavors (berries, pomegranate, etc.).

A glass of water flavored with syrup, especially sirop de menthe or sirop de grenadine, is a popular thing to order at French cafes, especially for kids.

If you’re an adult with a sweet tooth, like me, don’t worry – you can order one of these without being judged. Une grenadine is my go-to drink on a hot day here in Paris.

You can also buy different flavored sirops in the grocery store and mix them into your water at home.

Interestingly, this has started to become popular with some people in the US.  Because the syrups are imported, they’re pretty expensive in the States, but if you’re a fan, when you come to France you’ll be thrilled to know you can indulge: the average huge bottle here costs only a few euros at most, and will last a really long time.

Can you drink from fountains in France?

Many fountains in French cities and villages used to be a source of drinking water for the local population, before plumbing became standard in homes.

Today, though, you shouldn’t drink from any fountain unless it’s labeled as safe or is generally used for drinking, like a typical drinking fountain you’d find in an airport, for example.

There is one notable exception, though. If you’re in Paris, you’ll very likely come across at least one fontaine Wallace. These are the picturesque, usually green-painted covered fountains that have been in the city since the late 19th-century, a gift from Scottish philanthropist Richard Wallace. Wallace intended to make safe drinking water accessible to everyone, and his fountains continue to flow with drinkable water today. The only time you can’t drink from them is when they’re shut off – which, as with most fountains – happens when the temperature is very low.

You can find a map of drinking fountains in Paris (including a few that feature sparkling water (fontaine pétillante)!) here.

For other cities and regions, as a general rule, only drink from recognizable or labeled drinking fountains. Otherwise, whether it’s a massive decorative fountain, or a small one in a village that seems frozen in time, don’t drink the water!

Now that you know about water in France, here are some terms to help you talk about and order it.

Hopefully, this information, as well as practicing with the French Together course, will make you feel comme un poisson dans l’eau when it comes to water in French!