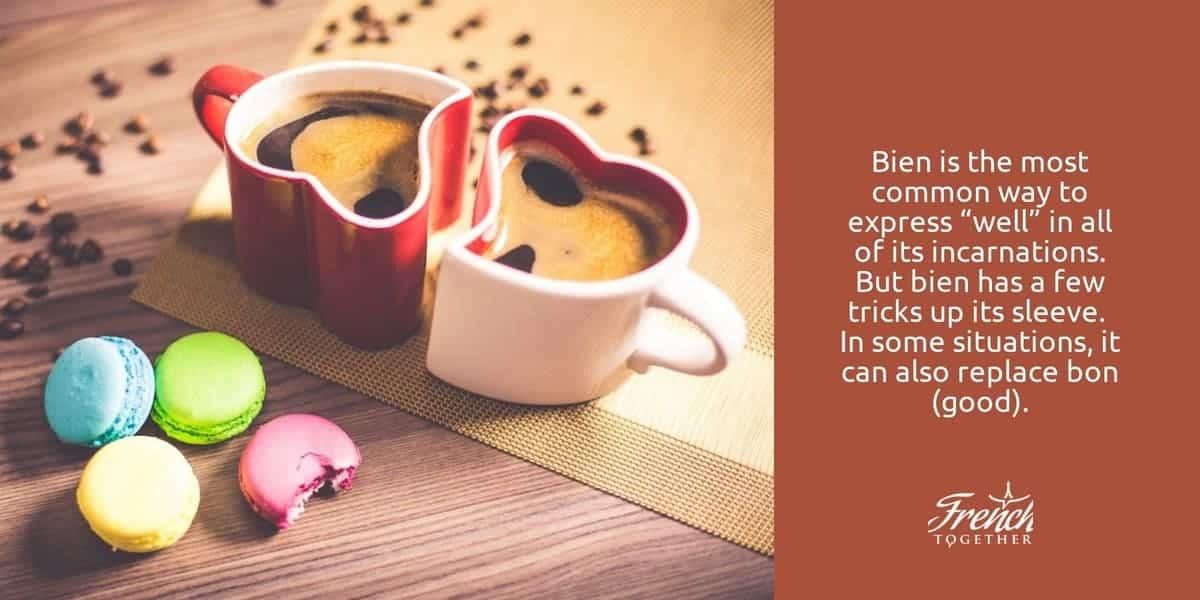 Well, well, well…you want to learn how to say “well” in French?

You’re in luck! Whether you’re talking about a general sense of wellbeing, something being done in a good way, or a degree of completeness or quality – among many other things – there’s one word for it all in French: bien.

Want to know more about this useful word, as well as other ways to say “well” in French? Eh bien, read on!

Table of Contents
When does bien mean well in French?
Other ways to say “well” in French
The bien and bon conundrum
Useful phrases and expressions with bien
Other “well” expressions

When does bien mean well in French?

Bien is the go-to word if you want to express just about any meaning of “well” in French.

For example, say you want to talk about something being done correctly or even in a superior way. You could say, C’est bien fait (It’s well done/made.) Or say you’re a judge on a cooking show. You could say, Votre gâteau est bien moelleux (Your cake is perfectly/very moist.)

That last example leads to another common use of bien – the sense of “well” as “very”. In English, especially American English, this is fairly rare. But it does exist. WordReference, which has an excellent list of the many uses of bien, gives the perfect example: the phrase “well aware.” For instance, Je suis bien consciente que les gens ont tendance à préférer les chiens, mais j’aime les chats. (I’m well aware that people tend to prefer dogs, but I like cats.)

Using “well” in the sense of “very” can also be seen when you’re talking about cooking – or when you’re ordering food. For example, one of the ways you can order your meat cooked is bien cuite (well done).

Another way of using “well” as “a lot” can be see with bien in a phrase like this: Je nage bien mais je suis loin d’être Michael Phelps. (I swim pretty well, but I’m no Michael Phelps.).

Then again, if you’re looking for how to say “well” in French, you may not have wanted to know any of this at all. Maybe you wanted to know how to talk about one’s health. Well, that, too, requires bien. Je vais bien (I’m doing well) is a good general way to say you’re in good health and spirits. On the other hand, you could hear Je ne me sens pas bien (I don’t feel well).

“Well” can also be a filler or transition word. Filler words are a bit vague when it comes to an exact translation, since their meaning is vague to begin with. The closest translation to “well” as a filler word in French would be eh bien, but you could also say alors or Bon ben… or many others. You can check out our article on French filler words for further filler word inspiration.

For additional, more subtle meanings of well and their translations, feel free to check out the WordReference list I mentioned.

Other ways to say “well” in French

Although bien is the go-to way to say “well” in French, there are a few other words you’ll use in specific situations, or sometimes just to vary your word choice.

Another way to say “well” in French is, simply, très, when you mean “very”. That being said, from what I’ve learned and experienced, bien usually has a slightly stronger connotation, a bit like the difference between “very” and “so” in English. For instance, if you compare the statement Nous sommes très contents que tu viennes (We’re very happy you’re coming) and Nous sommes bien contents que tu viennes (We’re so happy you’re coming.),  bien seems stronger and slightly more sincere.

You might also have been searching for a totally different meaning of “well” – for instance, a hole dug deep in the ground for water. This would be un puits.

The bien and bon conundrum

So, it seems like the big takeaway is that bien is the most common way to express “well” in all of its incarnations. But bien has a few tricks up its sleeve.  In some situations, it can also replace bon (good). There are some reasons for this, and some general rules that can help you determine when to use bon and when to use bien.

For instance, bien can stand in for bon to signify that something is good because it’s healthy or morally right. When you do this, bien would only be used with a verb that indicates a state of being, like être. For example,  Pourquoi tu as bougé le tableau? Il était bien, là. (Why did you move the painting ? It was in a good spot (for viewing, aesthetic benefits) there.)

In keeping with this concept, as a noun, depending on the context, le bien is the word used to express “the force of good”, as opposed to le mal  (evil/the force of evil).

You may have come across this – and understood – without knowing about this rule, if you’re a fellow Edith Piaf fan…or if you were forced to listen to her iconic song “Non, je ne regrette rien” in one of your French classes.

In the song, Piaf famously sings:

Non, je ne regrette rien. Ni le bien qu’on m’a fait, ni le mal – tout ça m’est bien égal, which translates to : No, I regret nothing. Neither the good things people have done for me, nor the bad – both are the same to me.

Le bon can also mean “good”, but in a more general sense, with less moral implication. Even so, while bien can sometimes mean “good”, bon will never mean “well”.

Despite the rules and everything else that I’ve just written, the more you speak, read, and hear French, the more you’ll be exposed to uses of bien and bon that will make you scratch your head. As Benjamin pointed out in an article on this challenging issue, in many cases, even native French speakers couldn’t tell you exactly why they’re saying bien instead of bon.

The best thing to do is keep practicing. This will lead to you getting used to seeing bon or bien in common phrases or sentence structures. I promise this is true – I know it has been for me.

Useful phrases and expressions with bien

Let’s get back to bien as “well”. Here are some useful phrases and expressions you’ll often come across:

Be careful not to confuse this with the expression bien fait pour.

aimer bien – to like (well enough). This expression can be confusing because it would seem to suggest you like something very well/a lot. But actually, it’s the opposite. In French, it’s better for someone to say je t’aime (I love you) than je t’aime bien (I really like you). I think it shows how the French generally seem to find overly emotional or expressive phrases and gestures insincere.  That being said, this expression isn’t necessarily bad to use. For example, I might tell someone, J’aime bien ces gateaux. (I really like these cookies) in a perfectly appreciative way.

aller bien ensemble –  to go well together. Usually used when talking about clothes or colors, this is a very useful phrase to know if you like to critique celebrity fashion like I do!

bel et bien – well and truly. Example: On est bel et bien perdus. (We’re well and truly lost.) Note that bel doesn’t change to agree with the number or gender of the subject, since this is considered a phrase apart.

bien se passer – to go well.  You’ll often hear or see this phrase in the past tense: Ça s’est bien passé? (Did it go well?) or La réunion s’est bien passée? (Did the meeting go well?).  Note that passer as a past participle has to agree with the subject in gender and number.

bien élevé(e), bien éduqué(e) – someone who’s well behaved, with the implication that they were raised well. To say this in a more general way, you could use the word sage.

Here are some common “well” expressions that don’t use bien:

Get well soon – Bon rétablissement.  This phrase always sounds clunky to me, but it’s what you say to anyone to show you hope they feel better, from your friends and family, to a boss or passing acquaintance. If you want to be very formal, you could say, “Je vous souhaite un bon rétablissement.”

well done – Bravo. You can learn more about using bravo and other words of praise and congratulations in French, here.

I hope that now, when it comes to expressing “well” in French,  tout ira bien pour toi (it will go well for you)!

11 thoughts on “Bien and Beyond: How to Say “Well” in French”