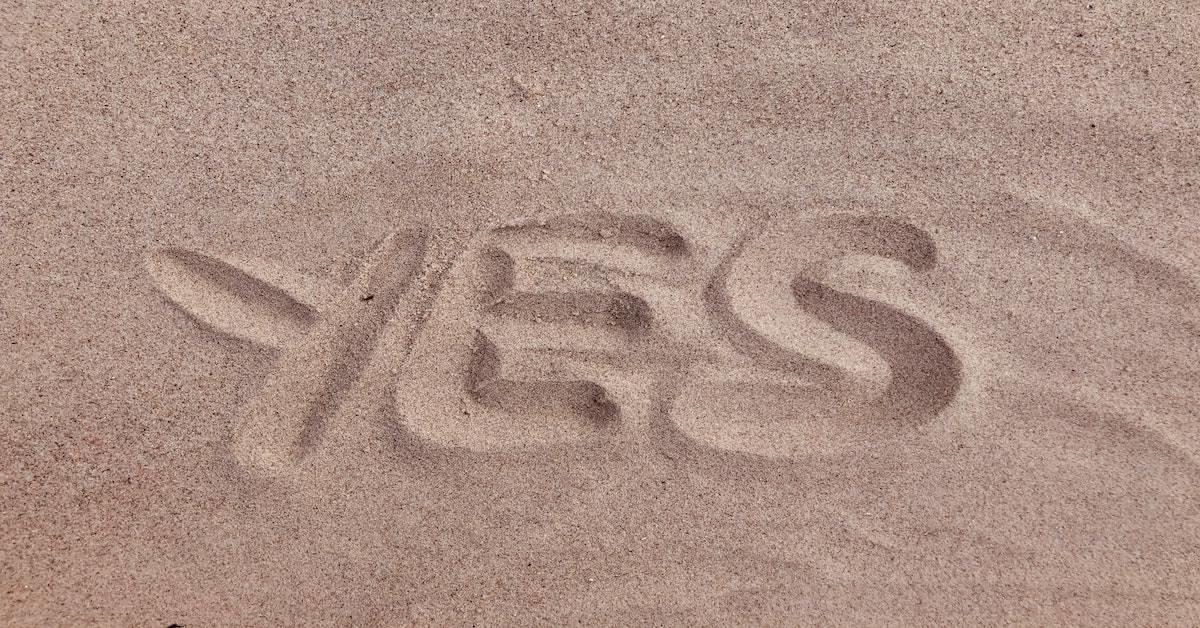 If you spend some time in France or do a lot of reading or listening in French, you’ll notice that the French don’t always answer “oui” when you ask them a question.

Instead, they might use the equivalent of “of course”, “yup” or “maybe”, or expressions like “Of course”, “I agree,” and “That’s it precisely.”  There’s even a way to say “yes” in French when you’re confirming a negative statement.

Let’s take a look at an impressive 28 different ways to say “yes” in French!

Table of Contents
The typical yes
The contradiction yes
The neutral yes
The casual yes
The obvious answer “yes”
The unconvinced yes
The “Where do I sign?” yes
The “I agree” yes
The irritated yes
The genetically modified yes
The “That’s right” yes
The intellectual yes
The “perfect” yes
The happy yes
Do the French always say “yes”?

A simple “Oui” is the most standard, basic, and neutral affirmative reply in French.

Oui has a long and fascinating history, and is the winner of a long-running linguistic battle. By the Middle Ages, French had evolved into numerous dialects that were essentially mutually unintelligible. But you could group them into three major categories: the langues d’oïl, the langues d’oc, and other dialects.  Oïl and oc refer to how speakers of these dialects said the word “yes”.

Over time, since it was spoken in Paris, the royal city, the langue d’oïl became the dominant dialect. Oui is the modern French evolution of the word oïl.

Oui is also a good word to know for romantics. In a traditional French wedding ceremony, the bride and groom answer Oui, je le veux (Yes, I want this (marriage, life together, etc.)).

You can use oui in just about any situation where an affirmative response is required. It’s a neutral expression, so there’s no sense of it being particularly formal or informal. If you want to make it sound especially polite or respectful, you can add something to it.

“Si” is what I like to call the contradiction yes.

The French use si to contradict negative questions and statements in both formal and informal situations.

You’ve never been to Nantes, right?

While si is used in France and by French-speakers in other European countries, many sources, including this one, point out that si isn’t used as an affirmation of a negative statement in Canada or in African Francophone countries. Canadians just say oui, while many African Francophone speakers would answer a question like this with non.

So, for a Canadian, the answer to the question in the example dialogue above would be Oui, l’année dernière.

For African Francophone speakers, the answer would be Non, l’année dernière – or maybe to clarify (as an English-speaker would do if they answered “no” to affirm a question), Non, j’ai visité Nantes l’année dernière.

“D’accord” is the French equivalent of “alright”.

If you break it down, this makes sense, since the word “accord” in both English and French implies agreement.

D’accord can be formal or informal, making it a great alternative to oui.

In addition to a stand-alone response, it’s also used in the expression “être d’accord” (to agree).

Shall we get together tomorrow?

I agree with you, kittens are cuter than puppies.

“Ça marche” is a casual way to say “It’s/That’s ok for me” in French. It literally translates to “That works”.

It’s an informal expression, so you can basically use it with anyone you are on a “tu” basis with.

You could also use the less common “Ça roule” (literally: “It/That rolls”) instead. This expression is the rough equivalent of “That’s cool.”

Sometimes people add “ma poule” (literally: “my chicken”) to the end: Ça roule, ma poule. This is a bit outdated and funny – think of it like “okey dokey” in English –  so if you want a serious reaction, don’t add ma poule.

If a person asks you something to which the answer seems obvious, you could answer:

You can use bien sûr in any situation, but évidemment is better suited to formal situations.

Your friend absolutely wants to introduce you to someone, but you’d rather stay at home. The conversation could go something like this:

As you might have guessed, mouais is a portmanteau of hum (um) and ouais (yeah).

In some cases, it implies being bored or unimpressed, as well as unconvinced. You can see this usage in this review of a restaurant, entitled “mouais bof” — the equivalent of “Meh” (not great or exciting) in English.

Note that mouais is extremely informal and could come off as rude if you use it in professional occasions or with a stranger. It should only be used with friends or people you can be casual around. Even then, if the person is talking about something they’re serious or passionate about, responding “Mouais” would probably come off as mean.

Sometimes an opportunity comes up that’s so exciting that you wish you could say “yes” even before the person is done talking. That’s when you can use “carrément” in French.  It’s the equivalent of “Absolutely!” in English.

But you should only use it in informal situations.

Want to go to Costa Rica this summer?

Note that in addition to its affirmative use, carrément is an adverb that means “totally/straight/straight up/dead”. You can see the different ways it’s used in this context, here.

The “I agree” yes

If you’re happy to do something, but can’t use the casual carrément because you’re in a formal or professional setting, you can opt for one of these variations instead:

Volontiers (Gladly/Willingly. Note the connection of this word with la volonté (will))

Here are two useful expressions you can use if someone asks you an irritating question:

While mais oui translates directly to “but yes” – in other words, “Yes, of course”, ben or bah are phonetic representations of the sound French people make when they say the equivalent of “um” or “uh”.

Although it usually shows irritation or annoyance, you may hear Mais oui used in sort of playful way, for example, in a commercial if someone can’t believe a deal they’re getting: Un iPhone X pour seulement 700 euros? – Mais oui!

Ben oui/Bah oui, on the other hand, denotes a certain sloppiness, disrespect, or extreme casualness, so even if you’re not intending to say it in an irritated way, never use this expression in formal or professional situations.

Always keep in mind that these two ways to say yes in French could easily be considered rude!

Here’s an example with each expression:

Yes, I already told you (I did) three times!

Duh. I told you I did it three times already!

Ouais is the “yeah” to oui’s “yes”.In other words, ouais means exactly the same thing as oui, but it’s much more informal.

It’s so informal, in fact, that some people may be irritated if you use it with them.

Similar to ouais is ouaip – the equivalent of the English “yep.”

Like ouais, ouaip is very informal and could be considered rude if you’re talking to someone in a professional or formal setting.

Ouais and ouaip are two awesome additions to your oui toolbox, but remember that to only use them with people you’re close to, that is with people you use tu with.

Even then, some of those people might not like these words. My five-year-old son, for example, often says ouais with his great-aunts and -uncles, and many of them correct him and make him say oui instead.

Here’s an example of a dialogue with ouais :

Good to know: If you’re excited about something, you can shout “Ouais !”, since this is the equivalent of “Yesss!” in English. Like “Yesss!”, remember that Ouais!  is still informal.

In Canadian French, the phonetic spelling of the informal way everyday people say “Yeah” is usually written as ouain or ouin (note that this latter is also the sound of a baby crying in French, which might be confusing in some contexts…).

When you want to confirm that what someone says is correct, you can use one of these (rather formal) words:

You are Monsieur Durand, right?

If you’re reading an academic paper, article, or literary text in French, you might come across this little word: certes.  Depending on the exact phrasing, certes can translate to “certainly,” “admittedly,” “of course,” and “To be sure”.

Although it’s not commonly used in everyday spoken French, it pops up in formal speeches, intellectual debates, and academic lectures. And you’ll also see it in formal or academic writing. So, you could say that certes is a common way to affirm a fact or idea when it comes to brainy subjects (and speakers).

Sometimes, you may want to say that something is perfect. In this case, you can use:

All of these expressions can be used in either formal or informal situations, so when you feel inspired to reply with one of them, you can do so without fear!  In extremely formal situations, though, I would suggest adding merci to the end of Parfait.

Is your room all right?

A common way to say “yes” in French is simply to say avec plaisir (literally: with pleasure.) Think of avec plaisir as the equivalent of “gladly.”

If you want to sound more formal, you can also say volontiers or even avec joie (literally: with joy). Keep in mind that the latter can easily sound mocking if said in the wrong context so make sure you only use it when you are genuinely delighted with an offer and want to enthusiastically say “yes”.

Do the French always say “yes”?

We’ve just seen that there are at least 28 ways to say “yes” in French. I say “at least” because individual regions and groups may have others, and there’s new slang coming out all the time that might include some additional forms of affirmative replies. When you think of it that way, the choices for how to say “yes” in French are practically infinite!

Interestingly, though, on the whole, the French aren’t exactly the most affirmative, willing people. In fact, a big part of French culture is contestation, refusal, and intellectual debate. The French refusal to just say oui to everything is very apparent when you live in France: there are frequently strikes in just about every professional sector imaginable!

According to this fascinating article, saying “no” is ingrained in French people from childhood, and is at the root of why si exists in French spoken in France, but not in certain other more “yes”-oriented Francophone cultures.

Now that you know a myriad of fun and exciting ways to say “yes” in French, pick your favorite from this list and try to use it with your conversation partner! You’ll immediately sound more French.

And if you’re also not one to agree with everything, click here to discover 13 ways to say “no” in French!