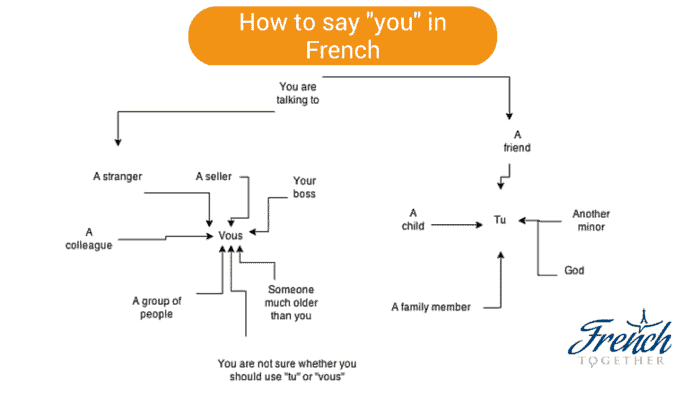 There is a right and a wrong way to say “you” in French. Or rather, there are different ways to say it depending on who you are talking to.

Use the right form and people will be happy to talk to you and amazed by your knowledge of the language ; use the wrong form and the only thing they will remember is how rude you are.

Here is how to choose the right “you” in French!

Why you must know the difference between “tu” and “vous”

How would you react if a stranger came up to you, and said: “hey dude, what’s up”?

You would perhaps be embarrassed, maybe even angry. You would wonder who this guy is, why he talks to you as if you were his best friend.

That’s exactly the same in French.

The distinction between “vous” and “tu” indicates your relationship to the person you are talking to. Using the wrong form will lead people to think you don’t respect them. For this reason, knowing when to use “tu” and when to use “vous” is critical.

That’s what you are going to discover now.

Vous: the formal French you

If you don’t know whether you should use “vous” or “tu”, use “vous”. Nobody will ever blame you for being too formal.

The last one is particularly important. If you talk to several persons, you always use “vous”, because “vous” is also the plural “you”.

Tu: the informal French you

Think about the people you are the closest to.

Your parents, your husband/wife, your friends, maybe some of your colleagues.

These are people you can use “tu” with.

You can also use tu with:

You never use “tu” when talking to a group.

Questions you may ask yourself about “tu” and “vous”

Can I start the conversation with “vous” and switch to “tu” later?

When you speak English, you sometimes start talking to someone formally, and then switch to a more informal language as you get to know each other.

The same happens in French. Sometimes, you start talking to someone using “vous”, and finish the conversation with “tu”.

This also happens when you start a conversation with “vous” because you aren’t sure whether you can use “tu” or not, and then realize using “tu” would be perfectly fine with this person, either because the person invited you to use “tu” or because it just feels right.

How to ask a person if you can use “tu”

Sometimes you won’t know whether you should use “vous” or “tu”. So to be safe, you can ask:

Do we use “tu” with each other?

or in a more formal way:

This is a rhetorical question though and answering no would be awkward.

In case of doubt, it’s always better to use “vous” than “tu”.

However, there are some rare cases where the use of “vous” instead of “tu” can offend a person.

Now you probably wonder how being more polite can offend someone.

The reality is that “vous” doesn’t only show respect, it shows distance. So when a 20 year-old uses “vous” with a 40 year-old, the 40 year-old may feel older as a result. In this situation, the use of “vous” highlights the difference of age.

The same is true between friends. If one friend uses “vous” and the other “tu”, this may create distance and make the friend who uses “tu” feel uncomfortable.

Is it okay if one person uses “tu” while the other uses “vous”?

It’s perfectly acceptable for one person to use “tu” while the other uses “vous”.

This happens when an adult talks to a kid for example.

Many people feel uncomfortable with this though, so they may tell you:

You can use “tu” with me

Should I use “vous” or “tu” on internet?

It’s much more common to use “tu” online than offline.

That said, the best way to know whether you should use “tu” or “vous” is to observe and see what people use.

If you’re on a video game forum, using “tu” will generally be okay. If you are commenting an article from Le Monde, “vous” would be much more appropriate.

Earlier, I told you that “vous” is also used when you are talking to a group.

This means that the verb following “vous” uses the plural form.

But this is also true when you are talking to only one person.

When you use “vous”, the following verb always uses the plural form.

Both sentences have the same meaning. The only differences is that the first one is informal, while the second one is formal or plural.

When you use “vous”, you need to use the verb ending “ez” at the present tense. An easy way to remember that is to think about the famous song Voulez vous coucher avec moi ce soir.

Note: to make it easier for you to understand what happens when you switch to “vous”. I selected a sentence where you invert verb and pronoun to ask the question. But this isn’t the most common way to ask a question in an informal situation.

Not sure which “you” to use in French?

Then use “vous” until you are invited to use “tu”. You may sound overly polite, but you won’t have to worry about being rude.

11 thoughts on “You in French: How to Choose Between Tu and Vous”